Al-Shabaab raids US military base in Somalia 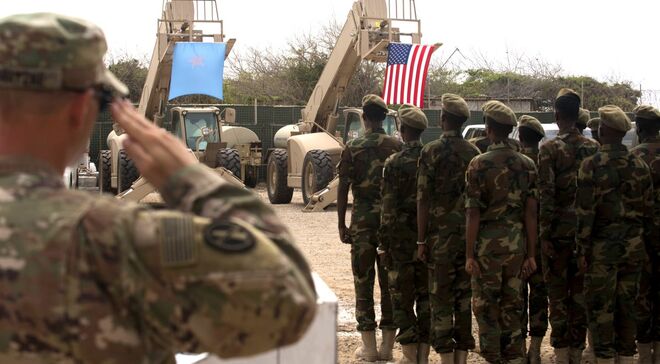 KISMAYO, Somalia - The Al-Qaeda linked group, Al-Shabaab, on Saturday raided a US-run military base in southern Somalia, the second attempt within the war-torn nation in as many months, in yet another attack which was successfully repulsed by hawk-eyed officers manning the facility.

According to eyewitnesses who spoke to Garowe Online, the militants raided the facility in Bar-Sanguni near Kismayo, the regional administrative capital of Jubaland, where elite officers from the US Africa Command and the Danab commandos are stationed, in the latest unsuccessful attack against security forces.

A heavy blast was heard from the military base's surroundings as the Al-Shabaab tried to make entry by disorienting the commandos guarding the facility, where Danab forces are trained and equipped by the United States of America, one of Somalia's major security partner.

Thereafter, a witness said, a heavy gunfight ensued between the commandos and Al-Shabaab and lasted for several hours. The militants were overpowered and vacated the scene, the witness added, arguing that massive destruction was also witnessed.

However, the US Africa Command, which regularly gives news feeds about such incidents, is yet to issue a statement in confirmation of the incident. The number of casualties or injuries is yet to be established both on Al-Shabaab and the allied forces.

But the incident comes almost a week after the US military announced the death of Abdulkadir Commandos, one of Al-Shabaab's top commanders, who was killed in an airstrike within the vicinity of Saakow town. The militant was among those highly sought for in Somalia and was the head of operations.

The attempted raid also comes almost a year when the Al-Shabaab tried to raid US main training base in Somalia, the Balligodle army base. During the September 2019 incident, at least 12 Al-Shabaab militants were killed by Danab troops who were manning the facility which is located on the outskirts of Mogadishu.

Early this year, the militants, however, managed to penetrate through a US Naval Base in Kenya where they killed three US citizens. The Manda Airfield attack was the first successful raid by the militants in East Africa but at least five militants were killed after a heavy gunfight.

Months later, the US named Bashir Qorgab as the suspect behind the Manda Airfield attack which occurred on January 5, 2020. The militant was killed in February in the outskirts of Saakow town, which is located within Al-Shabaab strongholds.

In June 2018, a US special forces soldier has been killed and 4 others wounded after militants launched the attack using small arms and mortar fire against the outpost raided on Saturday, a move that could have informed persistent airstrikes by the US Africa Command in the Horn of Africa nation.

Over the weekend, reports emerged that divisions have rocked the group following bitter succession rivalry. Group leader Ahmed Diriye, who is said to be battling with ill-health, is believed to have handed over to his deputy Abukar Aden amid escalating tensions between him and Amniyat leader Mahad Karate according to Somalia's spy agency NISA.

To date, the US military has waged a record 46 airstrikes in Somalia since January, the highest ever within the same period in as many years. The airstrikes have leftover 60 Al-Shabaab militants dead besides killing a total of two civilians and injuring a number of them according to a quarterly report that was issued by AFRICOM.