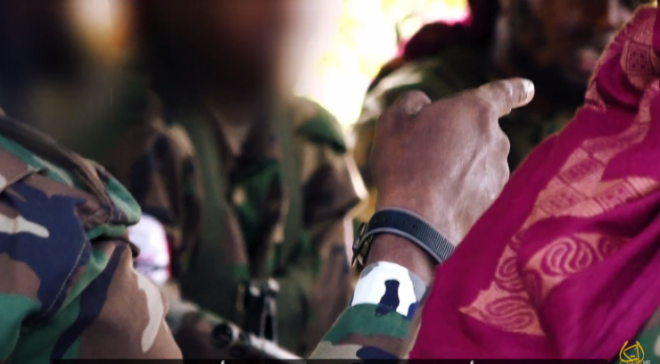 MOGADISHU, Somalia - Somalia-based Al-Shabaab militants have released a video of its leader Ahmed Omar Diriye alias Abu Ubaidah, purportedly captured moments before he released his team to attack Manda Airfield in Kenya which took place one year ago.

The video partially shows Abu Ubaidah sending off the fighters to Kenya ahead of the January 5, 2020 attack at Manda Airfield in Lamu County, which was the first successful raid against a US outpost in East Africa. The video was released by Al-Shabaab allied media outlets.

In the video, Abu Ubaidah appears to be a large person in general size and with a commanding voice. Al-Shabaab has not shown his face so far, and according to Harun Maruf, the author of Inside Al-Shabaab, there are no recent pictures of him online since taking over the reign in 2015 after Ahmed Godan was killed in a US airstrike.

The total number of fighters he released for the attack was five according to the Al-Shabaab media. In the video, his face is partially hidden thus making it difficult to make clues on his appearances, or even difficult to track him during operations.

Among those killed by the Al-Qaida linked group were two US contractors with the Department of Defense and one serviceman in a siege that lasted for almost six hours. Several aircraft were also destroyed by the militants, with security forces only managing to kill five attackers.

While it's clear that five attackers were killed, it's not clear whether it's the ones whose names were released or there were different sets of attackers during the raid. Both Kenya and the US admitted that the attackers caught their military unprepared in one of the most sophisticated raids of 2020.

There are complaints that Kenya Defense Forces [KDF] based in Manda Airfield "hid" in the grass during the raid but the country's department of defense dismissed the reports as "misguiding". It's from the facility that the US launches missiles against Al-Shabaab in Somalia.

After the attack, the US increased the number of servicemen at the facility and since then, US Africa Command leader General Stephen Townsend has visited Kenya twice.

Last year, a US airstrike in Somalia killed one of the masterminds of the Manda Airfield raid according to the US Africa Command, which identified him as Bashir Qorgab.

The US has since withdrawn its troops from Somalia in an operation that is scheduled to end by Jan 15 this year. On Sunday, Somalia's Prime Minister Mohamed Hussein Roble visited the US biggest facility in Somalia, the Balligodle Army base where he bid farewell to the outgoing team.

Although most leadership in Somalia opposed the move, the US maintained that it will redeploy the close to 700 troops across East Africa. It's believed that Kenya and Djibouti are the likely hosts of the American soldiers, who the outgoing President Donald Trump wanted out of Somalia.