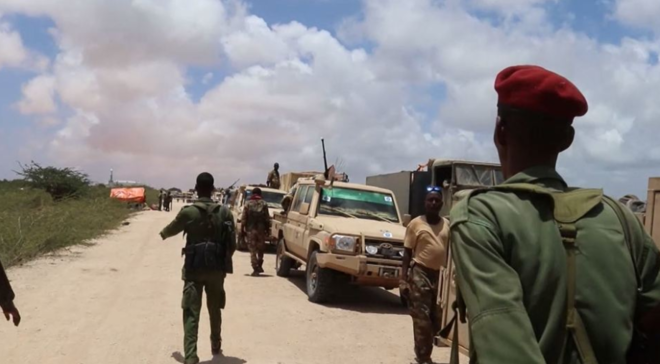 MOGADISHU, Somalia - At least seven soldiers from Somalia National Army [SNA] were killed in the vicinity of newly liberated Janaale town, the group claimed through proxy media, in an attack waged as retaliation after losing the battle a week ago.

Troops from Danab and Gorgor Special Forces, buoyed by AMISOM and the US military, captured the agricultural-rich town last week on Monday, after a heavy gunfight with the militants, officials said.

But in a retaliation staged on Monday, the militants detonated a bomb which exploded within the vicinity of the town, leaving seven troops dead, reports indicate.

The attack left several other soldiers wounded. They had seized most parts of the town and when the bomb blast hit the troops' convoy, dismembering several vehicles in the process, pro-Al-Shabaab media outlets reported.

As part of desperate attempts to recapture the strategic town, from which the militants have been collecting millions of dollars as Zakat, Al-Shabaab unleashed several mortar shells to newly established bases as well, before disappearing to their hideouts, officials said.

But despite the recent development, both AMISOM and SNA, who frequently confirm such catastrophic attacks, are yet to issue a statement. Multiple sources indicate that the subdued militants were, however, not able to sustain the battle.

Soldiers who sustained injuries are said to be under the case of AMISOM troops, who are helping SNA to establish concrete bases within the Lower Shebelle region, which is has been under the control of the Al-Qaida linked group.

At least 15 militants were confirmed dead, with three others seized after the crackdown, which was the first major operation in the region since February, when the militants killed over 20 SNA troops in El-Salini, not far from Janaale.

Hassan Suleyt alias Hassan Ganey was among those arrested and bundled into the military tracks, and will be interrogated to give a synopsis of Al-Shabaab operations, Abdihamid Mohamed, the SNA force commander said.

He was arrested along with two others, one identified as Mohamud Yussuf Mansur, who until his apprehension, was the head of explosives brigade in Lower Shebelle. Suleyt was the Amniyat boss in the region, officials said.

“The military raided his hideout and found the man and two others, they were taken into custody. We are currently interrogating them,” said the veteran SNA commander.

The SNA troops are combing the town, whose capture was described as "historic" by AMISOM, which is set to hand over security responsibilities to SNA troops by next year.

In fact, Somali PM Hassan Ali Khaire said the SNA troops would establish a "new administration" within the town, which was notoriously known "judicial" center given the parallel Al-Shabaab court in the region.

Al-Shabaab is progressively losing its territories in central and southern Somalia, due to frequent US airstrikes and subsequent ground operations by allied forces. There have been 31 airstrikes in Somalia since January, AFRICOM said.

Gen. Stephen Townsend, the US Africa Command leader, termed Al-Shabaab as an "existential threat" to both Africa and America when he recently testified before the House Armed Forces Committee.

AMISOM has started scaling down troops, with the exit tentative date set in 2021. Over the weekend, KDF handed over a camp in Dhobley to SNA, as part of preparations for Somalia's much needed stable future.