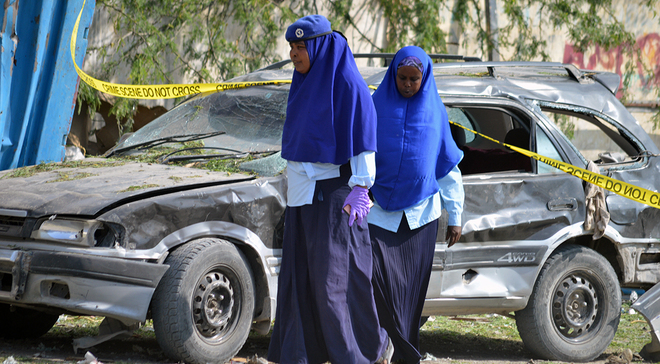 MOGADISHU, Somalia - Two Somali soldiers died on Wednesday in Mogadishu, police said, after their vehicle ran over an Improvised Explosive Device [IED], in an attack which further exposes the vulnerability of security forces.

Police said several other soldiers were injured during the attack at Digfeer in Hodan district, with one civilian also dying on spot. The injured were rushed to a nearby hospital for advanced treatment, police added.

It's not clear where the soldiers were going but regular patrols are synonymous with Mogadishu, the Somali capital which was seized from Al-Shabaab militants by SNA with the help of AMISOM troops.

The attack within the capital was the second in as many weeks, given that another bomber in a suicide vest detonated himself within a busy restaurant last week, killing three civilians, police said.

In a statement, the Somalia-based militants claimed responsibility for the attack, adding that it targeted "disloyal security forces working with enemies to undermine the sovereignty of the people of Somalia".

Mogadishu has borne the brunt of Al-Shabaab raids since 2008, in which the militants have often targeted security forces, foreigners, leaving several civilians also dead as collateral damage.

The militants waged one of the deadly attacks in December 2019 near Afgoye junction, which left over 90 dead and scores injured. But it would later apologize to civilians, claiming that "our target was a Turkish convoy. We regret the deaths of civilians".

Wednesday's attack comes amid an ongoing crackdown against the militants, who have failed to heed to UN Secretary-General Antonio Guterres's call for temporary ceasefire due to coronavirus pandemic.

A fortnight ago, the militants lost grip of Janaale town in Lower Shebelle. During the raid, SNA troops and their allies ransacked the town, leaving 140 militants dead, 28 injured and captured 18 alive, Gen. Abdihamid Mohamed said.

The militants have also been the target of the US military, which said that since January, 32 airstrikes have been conducted in central and southern Somalia, which is the last remaining stronghold for the militants.

Crippled due to limited finances, the Al-Qaida linked militants have however remained "strong and focused", and can wage small to large scale sporadic attacks, Islamic scholar Christopher Anzalone observes.

Intelligence reports indicate that the group is also facing an internal rebellion, which has seen its leader Ahmed Omar Diriye expel chief finance operator Mahad Karate. But the latter's clan has refused to acknowledge the expulsion.

To consolidate their dwindling fortunes, the group held a conference last month at an unidentified location, in which they agreed to "oppose" efforts to hold elections in Somalia, besides rubbishing the federal setup.

SNA troops are working around the clock to take over from AU forces in Somalia, whose tenure is set to end next year. There are about 7,000 active Al-Shabaab fighters in Somalia according to the US Africa Command.