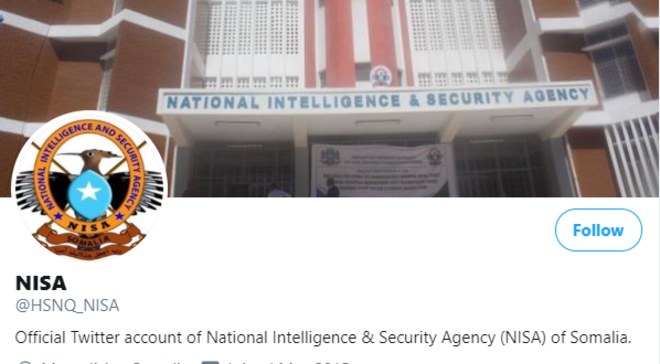 Muse Moalim Mu'awiye, the head of the group's intelligence wing famously known as Amniyat, resigned over the persisting wrangles within Al-Shabaab, NISA said.

Until his resignation, Moalim was in charge of the capital Mogadishu, which has borne the brunt of lethal Al-Shabaab raids in recent months.

Although the insurgents were driven out of the capital by Somali National Army [SNA] and allied forces, it has often executed deadly sporadic attacks, causing fear and anxiety, officials said.

In a statement on Thursday, the Fahad Yasin-led intelligence agency announced the unprecedented cracks within Al-Shabaab, linking the latest exit to last week's expulsion of two commanders.

The spy agency said: "The head of Al-Shabaab's Amniyat in Mogadishu Muse Moalim becomes the latest big name to resign from the militant group."

According to the agency, Mr. Moalimu resigned following growing factions within Al-Shabaab, which has seen top commanders also quit.

It said: "His resignation is directly linked to expulsion of two commanders last week. He was a close ally of Mahad Karate."

Ahmed Omar, the group's leader, is said to have expelled Mahad Karate and Bashir Qorgab last week from the executive council known as Tanfid over irreconcilable differences.

Preliminary reports indicated that the two commanders protested against frequent attacks targeting civilians within Somalia, a move that angered the Al-Shabaab leader.

"Ahmed Dirie, the leader of AlShabaab has expelled Mahad Karate and Bashir Qorgab from the executive council," NISA had said in a tweet.

The agency, which is responsible for security, added: "This after advising him to halt the frequent attacks targeting civilians in Mogadishu."

Although Al-Shabaab has often expressed commitment to 'guard' civilians, most casualties in their frequent attacks are innocent people, UN report had revealed.

The most recent deadly attack came in December 28th in Mogadishu, which left over 90 people dead and scored injured, authorities reported.

In a statement, Al-Shabaab said "we are sorry to the civilians who were affected. We only targeted a Turkish convoy and we had not intentions to kill innocent people."

The group has been greatly degraded by SNA and allied forces, with frequent battles and airstrikes forcing them to retreat to interior parts of Somalia, AFRICOM said.

But despite the exquisite progress in vanquishing the group, US still insists that "Al-Shabaab is extremely dangerous" to security in East Africa.

NISA has recently come under scathing attack from a section of leaders in Somalia, who accuse the agency of being used to settle political scores.

The spy agency also claimed Mogadishu attack had been engineered by a foreign country, only for Al-Shabaab to take responsibility days later, dealing a blow to NISA's narrative.