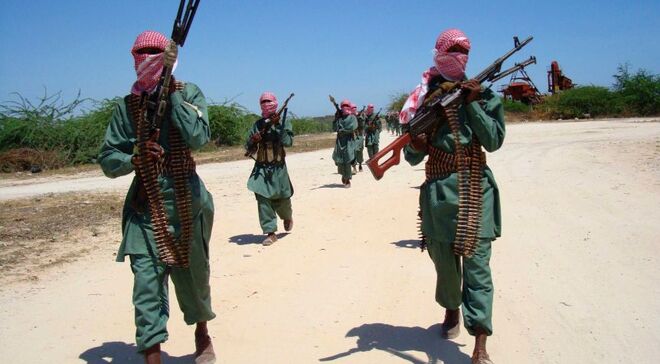 ELBUR, Somalia - Islamist group Al-Shabaab retreated from their strongholds within Central Somalia, reports have emerged, amid an ongoing crackdown against the terrorists, which is engineered by the Somali National Army [SNA], AU forces, and the US Africa Command team.

Reports indicate that the Al-Shabaab militants withdrew from Elbur town within Galgadud in Galmadug state after it emerged that the SNA troops and a contingent of Ethiopian National Defense Forces [ENDF] were planning to unleash a major assault against the militants.

Heavily armored military vehicles mainly driven by Somali National Army and the Ethiopian non-AMISOM troops made into the town, forcing the militants to quickly disappear to neighboring villages and thickets, sources said, but it's not clear if they will retaliate against the government forces.

According to sources, the town, which has been under the militants for almost a decade, becomes the latest to liberated, and Al-Shabaab, which depended on it for revenue, could lose a fortune since the government forces have already taken over.

The town was used for a long time to generate revenue for the militants through the erection of illegal roadblocks. Recently, it emerged that civilians who were opposed to the militants were openly executed, while dozens had been taken in as prisoners of war, with youths also forced to join the militants.

As a tradition, the government troops will comb the town before steering a civilian-led government which will take over once the military leaves. Al-Shabaab is yet to respond to the latest defeat, but they often release counter information denying that they have lost control of certain territories.

The presence of Ethiopian non-AMISOM troops in Somalia has often caused jitters but at least 1000 of them made entry early this year, and reports indicated that they were planning for a final assault against the militants. Their presence was buoyed by the support from FGS and Lieutenant General Tigabu Yilma, the AMISOM Force Commander whose tenure expired last month.

Al-Shabaab militants have been trying to topple the fragile UN-backed Somalia government, and have often targeted security forces, civilians, and even some government officials. The group still controls large swathes of rural southern and central Somalia, despite the fact that they have lost grip in a number of key towns.

Per the opposition, the current administration is Al-Shabaab-friendly, and that most of those working in NISA are sympathizers of the Al-Qaida linked group.

Some of the key towns that Al-Shabaab has significantly lost grip include Janaale town in Lower Shebelle, where they were elected in March 2020. In Lower Jubba, the militants lost Afmadow, Bilis Qooqani, Dhobley, and the strategic Kismayo town, which was their commercial city.