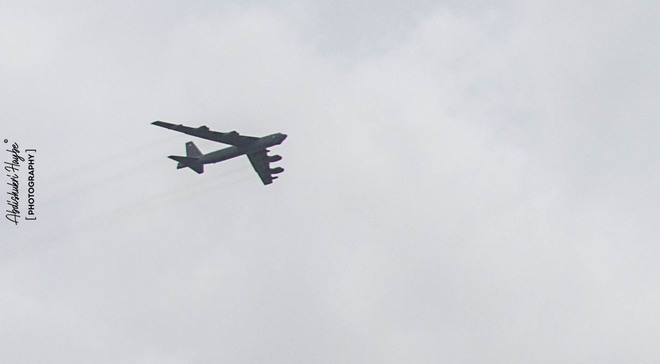 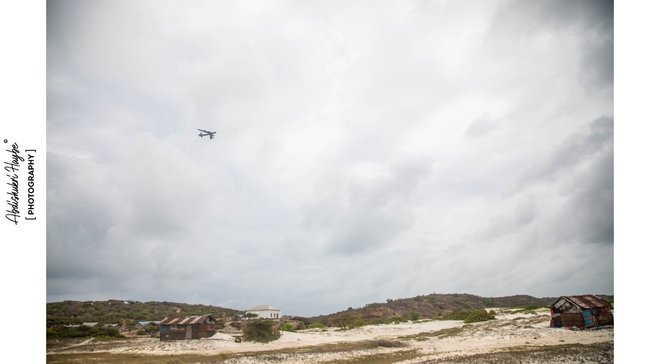 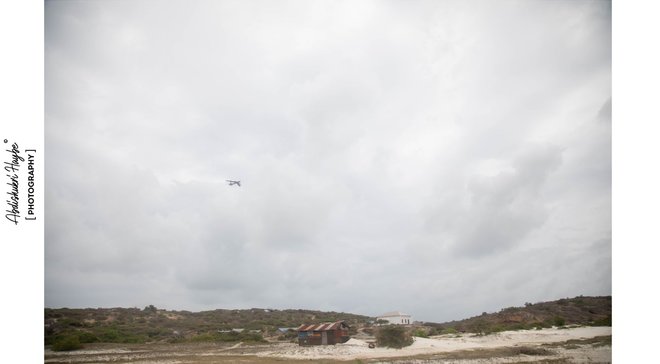 Quite synonymous with US Air Force, B-52H planes are rarely dispatched for delicate missions, unless with authorization from the Pentagon.

Abdishakri Haybe, an award-winning freelance photographer in Kismayo, spotted the plane in the southern part of the war-torn nation, causing confusion and concern among the locals.

The plane, which made several rounds in the region, appeared first at 14:30 hours local time, forcing him to take snaps near the sea line, 42 kilometers Southwest of Kismayo, he said.

He said: "The intention is not known since it made rounds while flying in low level across the town heading to the sea line. I took this snaps while in Koyama."

The B-52H carries a Sniper electro-optical and infrared pod that is primarily used for targeting, but it also can and is also used for surveillance.

For decades, Southern Somalia has borne the brunt of Al-Shabaab attacks, with the militants temporarily making the region a training base for their activities, AFRICOM said.

But in a quick rejoinder, US Africa Command confirmed the presence of the B-52H bomber in Somalia, adding that it was performing an unarmed training mission.

The US confirms the presence of the aircraft

"In concert with partners, A B-52 training mission occurred in East Africa. This long-range, unarmed training mission showcases the global reach and agility of U.S. forces," AFRICOM said, erasing fears of a possible raid in Somalia.

Donald Trump, the US president designated the southern part of Somalia as an area of "active hostilities" leading to an expansion of US military activities.

Notably, the US forces in collaboration with SNA soldiers, have conducted several strikes targeting Al-Shabaab in the region, with eight of them recorded this year.

Koyama island is situated 85 miles northeast of the volatile Kenyan border and 25 miles Southwest of Kismayo, the capital of semi-autonomous Jubaland state.

Jubaland has been earmarked as the hotbed of Al-Shabaab insurgents, who have taken advantage of the frosty relationship between FGS and Ahmed Madobe.

The B-52H flight's presence in Somalia comes about 72 hours after the visit of AFRICOM commander Gen. Stephen Townsend to Somalia.

In the company of US ambassador Donald Yamamoto, Townsend toured Jubaland and Puntland, a meeting area leadership.

“I commended Madobe for coordinated operations by the Jubaland Security Force, Danab, and SNA that have struck at al-Shabaab in the Juba River Valley,” Yamamoto said, recognizing Madobe as president for the first time.

He added: “We call on the Federal Government and all Member States to work constructively together to fight our common enemy al-Shabaab."

Gen. Townsend, the senior-most US military officer in Africa, had also visited Kenya, which is strategic in the fight against the Al-Shabaab militants.

He toured the Manda Airfield, which was attacked by the militants on Jan. 5, leaving three Americans dead. It's located 60 miles from the Kenya-Somalia border.

Al-Shabaab attacks on US bases

The Somalia-based militants remain the biggest threat to East Africa's security and stability, Townsend had told the US Senate committee last month.

In September last year, the militants attempted to raid the Ballidogle army base in Somalia, which hosts the US forces, but they were repulsed by Danab forces, AFRICOM said.

However, the troops managed to wage an attack at Manda Airfield in Kenya, a move that raised concerns over the preparedness to tackle such raids.

In January, testifying before Congress, the AFRICOM chief admitted that the defenses at the sites in Kenya were lacking and that he was concerned about the potential for another attack.

“We weren’t as prepared, and we’re digging in to find out why that is the case,” Townsend told lawmakers. “Al Shabaab has shown their reach, and the danger that they pose, and I think that we need to take that seriously.”

The B-52 was designed and built by Boeing, which has continued to provide support and upgrades. It has been operated by the United States Air Force since the 1950s.