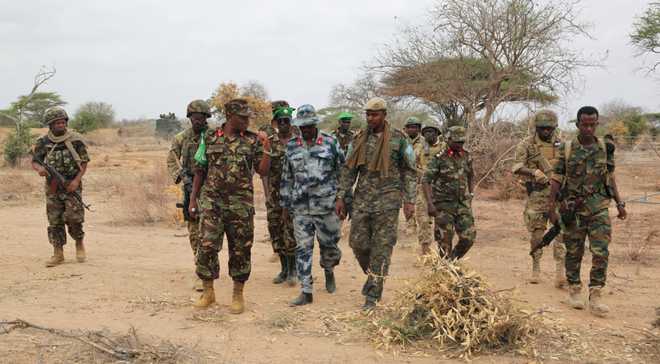 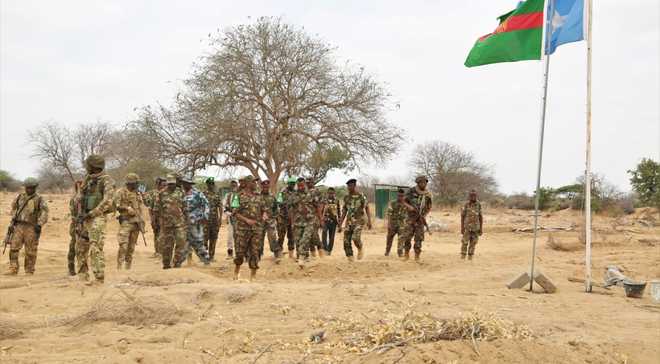 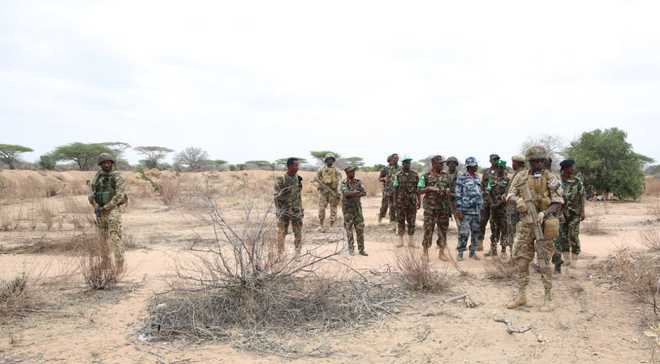 KISMAYO, Somalia - Somali National Army [SNA] serving in Sector II have been relocated to a new camp in Dhobley, AMISOM said, having served jointly with troops from Kenya Defense Forces [KDF] for a couple of years.

Dhobley, which is located in Jubaland, was liberated from Al-Shabaab militants in 2013, following intensive fighting. The town has been used lately for strategic purposes in the fight against the Al-Qaida linked militants.

Under the transitional plan in which SNA troops are set to assume security responsibilities in Somalia, the new camp will accommodate more soldiers upon AMISOM's planned exit in 2022, officials said.

Brig. Paul Njema, who took over Sector II from Dickson Rutto in February, visited the new Forward Operating Base [FOB] in Dhobley where he offered leadership tips to the SNA troops on how to fortify the base in line with AMISOM standards.

The Sector II commander promised to fast-track the provision of the requisite construction materials as part of the wellness program to ensure the soldiers are secure. He visited the base last week.

“This is just the beginning of better things to come as AMISOM continues to hand over the security responsibilities to the Somalia National Army," Brig. Njema told the SNA troops during the debriefing.

He added: "As we continue to set up this camp to accommodate the big number of soldiers deployed here, our key role remains to pacify Somalia from enemy activities across the sector and specifically Gedo, Middle and Lower Juba which is our main area of responsibility."

KDF mans Sector II and VI in Jubaland, with Ethiopia National Defense Forces [ENDF] being entrusted with Sector III. But the troops have recently had a standoff in Gedo, threatening peacekeeping mission in Somalia.

The new camp, Njema added, is strategically placed to enable the soldiers to carry out their activities with the support of AMISOM troops as the fight against Al Shabaab continues to gather steam.

Jubaland is one of the states that has been infiltrated by the militants, who have, however, braved US military airstrikes, AMISOM and SNA sophisticated operations within certain villages in recent weeks.

“In line with this, we are looking forward to opening up Dhobley-Tabda-Belles Qoqani-Afmadhow main supply route all the way to Kismayu so as to open up the hinterland and bring back normalcy in the day to day activities of the Somali people,” he added.

Mohammed Badal Hassan, the SNA 43 Brigade commander, said the new camp enables him to account for each of his team members, adding that the previous makeshift camp in Dhobley made it "difficult" to execute routine operations.

“We thank AMISOM for this gesture. On behalf of SNA and my men, we can’t quantify the overwhelming logistical and expert support we continue to get from AMISOM as fronted by Sector II headquarters,” he said

“As we continue to improve this camp, we are looking forward to furthering engagements with AMISOM to ensure that our soldiers in this camp continue working hand in hand with KDF soldiers in pursuit of peace across the region,” he added.

AMISOM and the US military have been entrusted with duties to prepare the SNA troops ahead of 2022. Fundamentally, Somalia has not had a functional army for decades, but there are traces of good progress given the latest capture of Janaale town in Lower Shebelle.

The commander further noted that through joint patrols, the troops will become better skilled and equipped as a mission-ready force. KDF has been using Jubaland as a buffer zone in the Al-Shabaab war.

AMISOM sector II continues to engage SNA and other security forces within the Sector as part of AMISOM’s mandate to provide key leadership and mentorship programs to security forces in Somalia to prepare them to take security their great country, officials said.

Kenya has around 3,000 troops serving in AMISOM. They were incorporated into the mission in 2012, a year after their incursion in Somalia. Routinely, the troops have been rotating annually, reports indicate.

Despite significant gains like the liberation of Dhobley, Kulbiyow, and Kismayo, KDF has also suffered casualties in the process. A total of 300 soldiers were killed by the militants in El-Adde and Kulbiyow in 2016 and 2017 respectively.