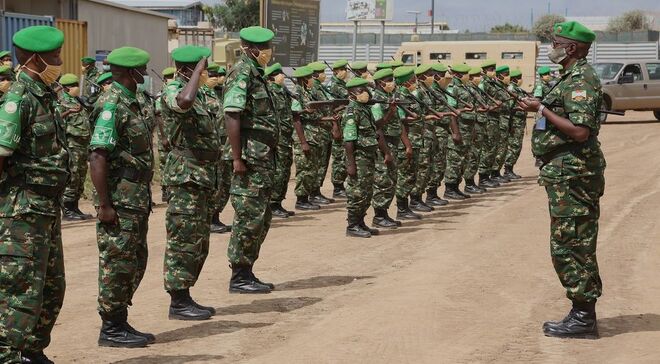 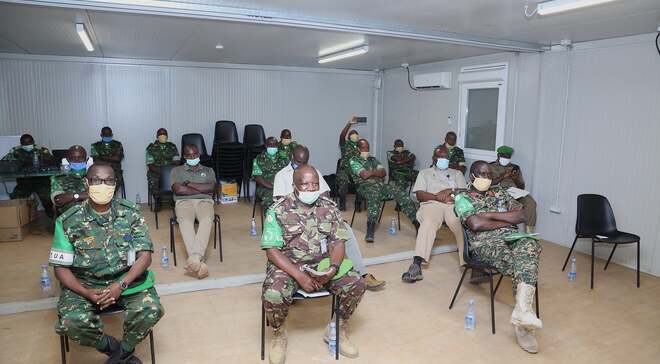 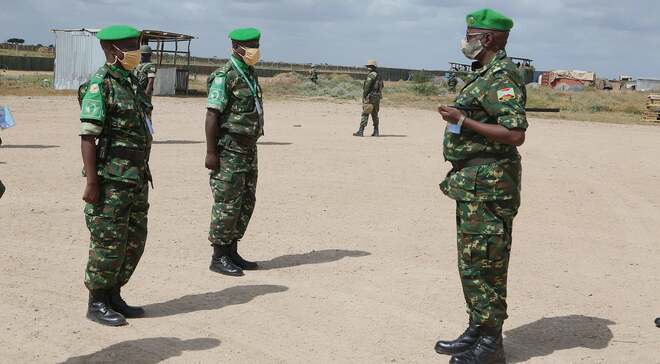 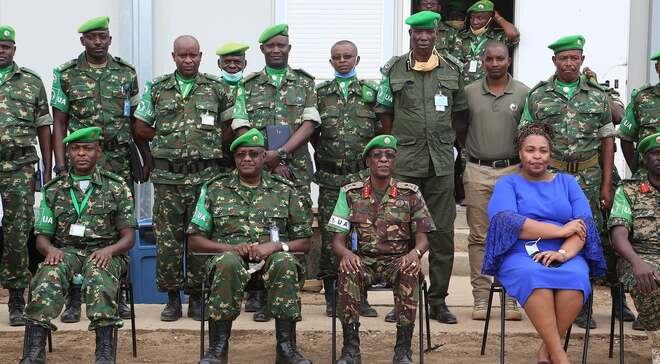 MOGADISHU, Somalia - The new African Union Mission Force Commander Lieutenant General Diomede Ndegeya paid a visit to soldiers serving in Sector V of AMISOM in Jowhar, HirShabelle state, as part of his ongoing familiarisation tour across the country, over a month after he took over the leadership of the force.

Soldiers from the Burundi National Defense Forces [BNDF] serve in Sector V of AMISOM whose headquarters are in Jowhar, the regional administrative capital of HirShabelle. The town is located at least 90 KM North of Mogadishu, the Somali capital.

Lt. Gen. Ndegeya, who assumed command of the force recently, was received in Jowhar on Sunday by the Sector 5 Commander, Brig. Gen. Richard Banyakinbona and other AMISOM officials. He is also a member of BNDF, where he has risen ranks to the three-star general.

He inspected a guard-of-honour mounted by AMISOM troops, and later held a closed-door security meeting with the sector commander and other senior military officers. This was his second familiarization trip after visiting Ugandan People's Defense Forces a fortnight ago.

Lt. Gen. Ndegeya applauded BNDF for the unwavering commitment and bravery they exuded in 2011 when fighting alongside Ugandan AMISOM troops and the Somali National Army (SNA), they liberated the Somali capital, Mogadishu, and ejected the Al-Shabaab from the city.

“The Burundi National Defense Forces were the second AMISOM peace-keepers to be deployed to Somalia in 2007, and took an active role in the liberation of Mogadishu," he said as quoted by the AMISOM.

"Notable areas liberated by the Burundi National Defense Forces together with Somali National Army include ‘Gashaandhigga’ the Ministry of Defence, Jaale Siyaad Military Academy, Bakara market, the military hospital, the African village which was the venue of the African Union Summit held in Mogadishu, Somalia in 1975,” he added.

Gen. Ndegeya noted that Somalia had played an instrumental role in the maintenance of regional peace in the past, and that it was time for the rest of Africa to reciprocate. Before plunging into chaos, the Somalia army had participated in peacekeeping missions especially in Burundi and Mozambique.

“Somalia used to be a ‘big brother’ in Africa, and not only supported Burundi but also many other African countries, especially the South African Republic during the apartheid liberation war. It is therefore our turn to return the favor and help bring peace to Somalia, as we already have done,” he noted.

He commended Sector 5 for their operations in the Middle Shabelle region, saying they have proved to be a lifeline for many, and urged them to continue working closely with Somali security agencies and the local administration in order to rid the area of any threats and secure the main supply routes in the region.

Oh his part, the Sector 5 Commander, Brig. Gen. Richard Banyakinbona, thanked the Force Commander for making the effort to touch base with the troops and know their needs firsthand.

“We sincerely thank you and acknowledge your loyalty in supporting our efforts to achieve the AMISOM mandate in Somalia,” Brig. Gen. Banyakinbona said, adding that the troops have significantly degraded the Al-Shabaab militants in HirShabelle.

Al-Shabaab has been fighting to topple the fragile UN-backed Somalia government, which has been in place for decades. The militants control large swathes of rural southern and central Somalia but have in the recent months considerably lost grounds.