AU forces intensify security work in Somalia ahead of elections 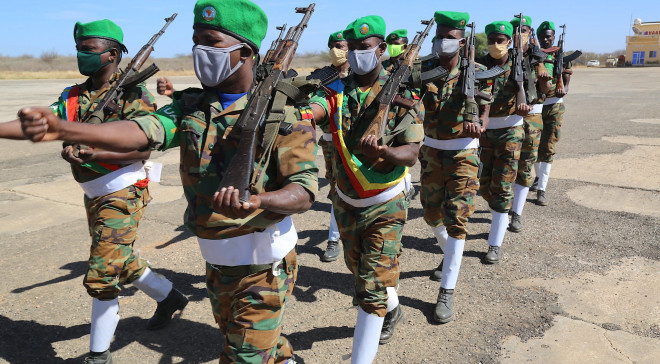 MOGADISHU, Somalia - With just a few days to elections, the African Union Mission in Somalia has intensified trips across Somalia, a move which is meant to boost security and cooperation between the forces and other stakeholders, to pave way for a smooth transition in the country.

Deputy Special Representative of Chairperson of the African Union Commission [DSRCC] Simon Mulongo led a team to Baidoa, the regional administrative capital of Southwest where matters security in Somalia topped the agenda.

Their discussions were about ways to improve the capacity of Southwest State police and enhance joint security patrols with AMISOM Formed Police Units during the election period.

“We met with the Speaker of Parliament and his team who are responsible for security. We also met His Excellency the President of Southwest State, with whom we discussed similar matters that will ensure that there is smooth coordination, co-operation, and operations in the whole of Southwest State. We agreed on how Southwest State Police are going to be organized and re-organized for the purposes of enhancing their policing activities,” Mulongo said.

“We have also met with the AMISOM police and military component. We discussed issues of re-aligning and harmonizing our activities in the region and in the sector. Particularly, we looked at how the Formed Police Unit, together with Individual Police Officers, can better collaborate with Somali police to ensure that they strengthen matters of policing, especially as we plan for a secure electoral process in the whole of Southwest State,” Mulongo said.

AMISOM Police Commissioner, AIGP Kailie reiterated the importance of working closely with Somali forces to improve security to, during, and in the aftermath of the electoral process.

“We came here to harmonize our operations. Elections are approaching, so we have to provide joint security. The police will be involved, the military will be involved, the civilian component will also be involved. Because of that, we have put modalities in place on how to jointly provide security for the elections,” AIGP Kailie said.

Somalia is preparing for crucial national elections, and AMISOM is mandated to provide security during the process in a spirit of consensus and collaboration with the Somali security agencies to ensure the process is secured.

The AMISOM Police Component and the Somali Police Force [SPF] are both parts of the National Election Taskforce, the highest security team tasked with securing the elections. The task force will have satellite command centers across the country including Baidoa in Southwest State.