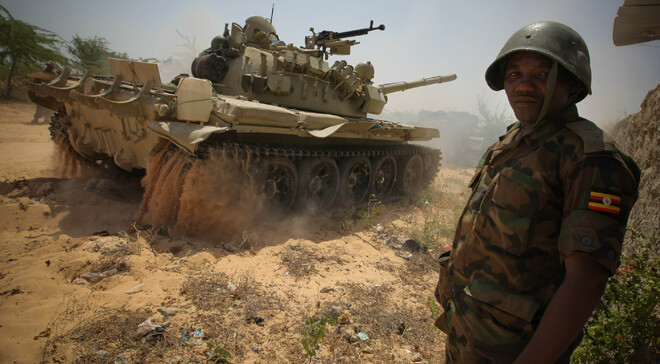 MOGADISHU, Somalia - At least three innocent civilians died on the spot while two others were left with severe injuries in the northeast of recently liberated Janaale town, AU Mission in Somalia acknowledged, following a gunfight between the AU forces and Al-Shabaab militants.

The Al-Shabaab militants ambushed African Union forces manning main supply routes in the region on Monday, a move which triggered heavy gunfight between the two parties, AU Mission said in a statement on Tuesday.

According to the AU, forces stationed within the area had received a top off that the militants had planned to attack and disrupt the movement of people and goods in the region, necessitating a quick action from the troops, read the statement.

In the process, AU said, some civilians were caught on the line of fire, resulting in casualties. Initial assessment showed that three women were killed in the crossfire while two others were injured and have since been taken to AMISOM hospital.

Lt. Col Charles Imbiakha, the spokesperson for the AU forces, said, "We would like to render our sincere apologies and heartfelt condolences to the families of the deceased and wish the injured a speedy recovery."

This was the first time in as many months AMISOM troops were directly linked to the deaths of civilians. Throughout their operations, the troops are usually cautious about civilians, which is part of the mission's mandate in the war-torn nation.

Francisco Madeira, the head of AMISOM mission, who has been facing internal criticism in Somalia, insisted that the force is committed to the protection of civilians, and accused Al-Shabaab of planting IEDs along main supply routes in Somalia.

“While fighting terrorists, we remain committed to protecting the population and main supply routes where terrorists often plant IEDs and detonate to cause mayhem," Ambassador Madeira said in a statement as quoted by the AMISOM.

"The Monday, June 8, 2020 incident was unfortunate, and I sincerely offer my condolences to the families of the deceased," he added while pledging that the force would ensure normalcy is restored within the region.

Janaale town was liberated from the Al-Shabaab in March this year following a joint operation conducted by the Somali National Army [SNA], the African Union forces, and US Africa Command, which provided air surveillance during the exercise.

Close to 140 Al-Shabaab militants were killed during the operation, reports indicate. Since then, the agricultural-rich town is guarded by the elite forces from Danab Infantry Corps, who have been helping residents to normalize their lives.

Ugandan troops man large sections of Lower Shebelle according to details obtained from the AMISOM. The troops have foiled many terrorist attacks within the region including an attempted raid by the militants at Barawe airport.

Al-Shabaab militants have been causing mayhem within the Horn of Africa nation for several years now, but the team has been degraded substantially due to persistent airstrikes and ground combats conducted by government troops and their allies in Somalia.

AU forces are set to formally exit Somalia in 2021 under the current Somalia Transition Plan. The troops are credited for liberating several strategic towns including Mogadishu and Kismayo, the regional administrative capital of Jubaland state.