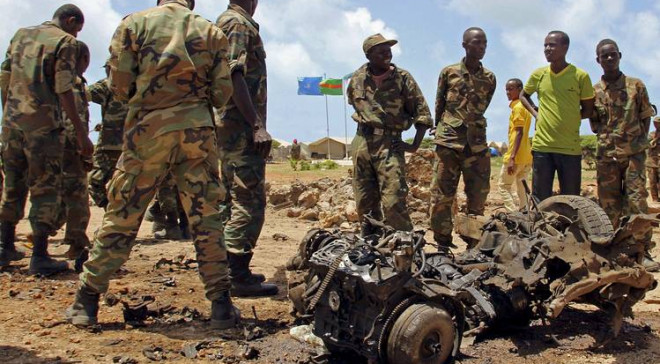 MOGADISHU, Somalia - Dozens of recruits and their trainers are feared dead, a senior police officer told Garowe Online, following a bomb blast at a military training school in Somalia, in what could be a deadly suicide incident in the recent weeks, targeting security forces.

Captain Abdi Barre, who serves in the Somali Police Force confirmed that a suicide bomber blew themself at the military camp named after General Abdikarim Yusuf Dhagabadan, which hosts thousands who recruits and their trainers.

Some reports indicate dozens of recruits may have died in the deadly incident, a number which may exceed most recent deadly raids by militants targeting security forces in the Horn of Africa nation. Those injured have since been rushed to various hospitals in Mogadishu.

The rescue mission was still ongoing at the site, Captain Barre said, adding that military officers were part of the teams conducting the mission. Police officers have since taken control outside the scene of the bomb blast, the seasoned officer added.

Named after General Abdikarim Yusuf Dhagabadan, a former army commander who led the offensive that forced Al-Shabab to retreat from Mogadishu in August 2011, the military training center is used for equipping special forces in various Somali military forces.

The renowned military general was killed in the Al-Shabaab raid on Sahafi hotel in Nov 2015. His efforts in combating the Al-Qaida-linked militants led to the naming of the military camp after him, and it has since remained one of the most appreciated military bases in the country.

Although no group is yet to take responsibility for Tuesday's deadly raid, Al-Shabaab militants are known to unleash such attacks, targeting security forces. Early this year, Al-Shabaab confessed to having used a suicide bomber in an attempt to attack a Turkish-run military base in Somalia.

The attack comes at the time the Somali National Army [SNA] is running a series of operations in the country under the command of Chief of Defense Forces Gen Odowaa Yusuf Rageh. So far, state media confirmed, over 200 militants have been killed in the last three weeks.

Further, the attack comes just a week after President Joe Biden confirmed that hundreds of American soldiers will be deployed to Kenya in the fight against Al-Shabaab. The soldiers were withdrawn from Somalia as a cut-saving measure as outlined in the Department of Defense.

The attack at the military base is still developing news, the Garowe Online will keep updating, including the exact number of casualties and those who were injured.