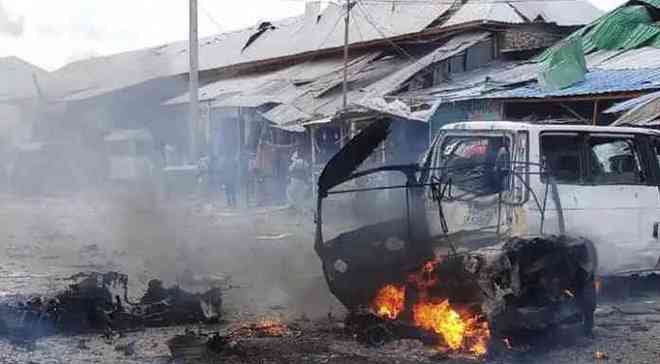 MOGADISHU, Somalia - A car bomb in Somalia's capital Mogadishu on Monday has killed at least two people and wounded 6 others, shattering a period of relative calm in the capital, Garowe Online reports.

Police said the powerful explosion occurred in the morning at Ex-control security checkpoint after police stopped a speeding vehicle packed with IEDs, prompting a heavy exchange of gunfire with 3 attackers.

A witness said the car bomb was intended to target was a levy office in the area; however, the security forces successfully averted it. The fate of the suspected armed militants remains unknown after the shootout.

Ambulance sirens echoed across the blast scene as soldiers at the checkpoint fired in the air to disperse onlookers who gathered nearby and to stop motorists trying to pass through the site amid the chaos.

There was no immediate claim of responsibility for the foiled assault, but Al-Shabab has stepped up assaults in the Horn of Africa nation in recent months, with focus on Mogadishu, the seat of Somali Government and diplomatic missions.

Monday’s car bomb attack was the latest in a long line of bombing and assaults claimed by the Al-Qaeda-linked Al-Shabab, which has fought for more than a decade to topple the Somali government.

The armed group, Al-Shabab which lost key areas in recent years has been fighting since 2007 to topple Somalia's fragile government, which is backed by a 20,000-strong African Union force, AMISOM.