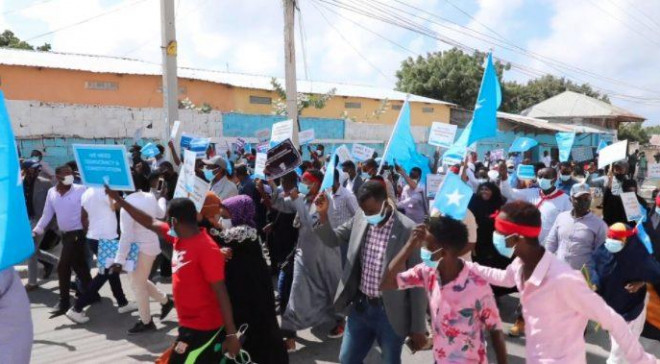 MOGADISHU, Somalia - A health worker in Somalia’s capital says at least five soldiers were killed and more than a dozen people, mostly civilians, were wounded in violence related to protests over the country’s delayed election.

Abdi Bafo, a doctor at the Medina hospital, spoke on Saturday, the day after Somali security forces fired on hundreds of people peacefully demonstrating in Mogadishu over the delayed vote.

The capital was calm on Saturday, and the streets were open again after being blocked on Friday.

President Mohamed Abdullahi Mohamed is under pressure as the Feb. 8 election date came and went without resolution of issues related to how the vote is conducted in the Horn of Africa nation. Some Somalis are demanding that he step down.

The president has not commented publicly since Friday’s events. Prime Minister Mohamed Hussein Roble has said he was “very sorry” about what happened.

Some Somali elders have been shuttling between the opposition and government leaders.

“Both sides have promised us peaceful means of resolving the crisis,” one elder, Ugas Abdullahi, told reporters. “The government has been very suspicious of the opposition while stating that (extremist group) al-Shabab might infiltrate, benefiting from the chaos.”

The international airport in Mogadishu, which diverted flights on Friday after being hit by a stray mortar round during the chaos, was operating normally on Saturday.

Friday’s confrontation followed gunfire overnight near the presidential palace. Somalia’s government blamed it on “armed militia” but former Somali president Sharif Sheikh Ahmed asserted that the government had raided the hotel near the palace where he and another former president, Hassan Sheikh Mohamud, were staying ahead of the protest.

The goal of a direct, one-person-one-vote election in Somalia remains elusive. It was meant to take place this time.

Instead, the federal government and states agreed on another “indirect election,” with senators and members of parliament elected by community leaders — delegates of powerful clans — in each member state.

Members of parliament and senators then elect Somalia’s president.

An alliance of opposition leaders, along with civil society groups, have objected, arguing it leaves them no say in the politics of their own country. And the regional states of Jubbaland and Puntland refused to take part.