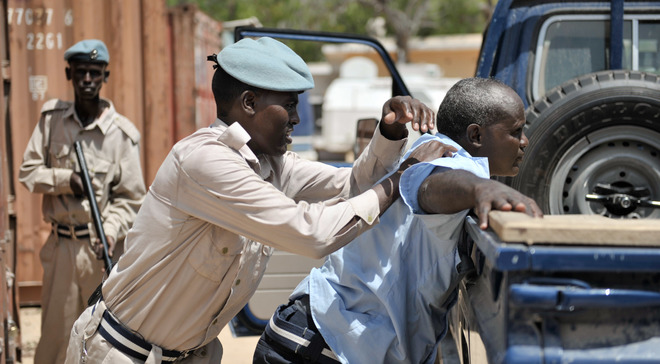 MOGADISHU, Somalia - At least 60 suspected Al-Shabab militants have been arrested during a sweep in Mogadishu, the Somali capital following a car bombing ahead of a crucial parliament session, Garowe Online reports.

A senior police officer, Hussein Mohamed, told Garowe Online that police interrogating a number of men who we strongly believe are linked to Al-Shabaab and have knowledge of Tuesday’s car bomb blast in the seaside city.

Mohamed gave no more details on the casualties of the explosion which the eyewitnesses said has resulted from an improvised explosive device [IED] attached to a vehicle belonging a local official.

In the wake of the attack, house-to-house searches were carried out by the Somali security forces in the capital, which was once controlled by Al-Shabaab, the Al-Qaeda’s most powerful ally in East Africa.

The security operation was conducted at Bulla Hubey, Madina market, located near the heavily fortified Mogadishu airport, where a man believed to be senior security official was killed on Tuesday morning by unknown gunmen.

Although the militant group recently lost most of the key strongholds following a sustained offensive by Somali and AU forces, it has continued to carry out bombings and shootings across the country.

No one has claimed the responsibility for the explosion and the murder but the incidents bore all the hallmarks of the Al-Shabab group, which frequently attacks hotels and hunts security force members and civil servants.

The attack is another reminder of the security challenges facing the Somali government, which, despite deploying hundreds of soldiers across the seaside capital is still unable to prevent deadly attacks.

In the past few months, Somali security forces have dramatically intensified routine operations in and around the capital to beef up security in the city and avert Al-Shabaab attacks.