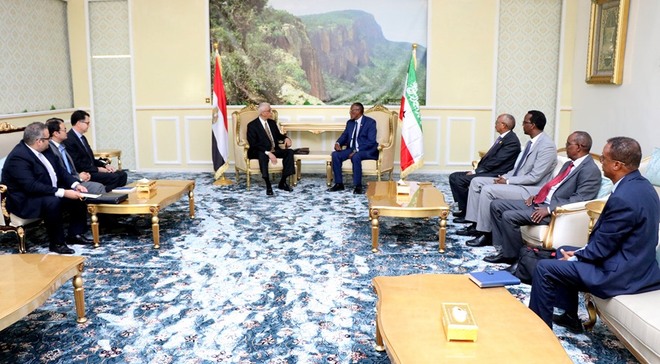 HARGEISA, Somalia - A high-level Egyptian delegation visited Somaliland on July 12th, sources have confirmed, in what could be the growing influence of the northern breakaway region of Somalia, which has been pushing for international recognition for three decades now.

The delegation which included top government officials from Abdel Fattah el-Sisi's administration is said to have arrived in Hargeisa on Sunday and held a meeting with President Muse Bihi Abdi and his team where bilateral ties between Hargeisa and Cairo dominated.

According to a credible source who is privy to the high profile meeting, the team from Egypt stayed in Somaliland for two days and is said to have left on Tuesday. At Hargeisa, they held bilateral meetings with officials from Foreign Affairs, education, and the Ministry of Fisheries and Livestock, the source added.

Details of the team's meeting with Muse Bihi Abdi remain scanty but they are said to have had "a few minutes with the president". Bihi has been in a charm diplomatic offensive where he is rallying for the recognition of the secessionist state which cut ties with Somalia in 1991.

Sources intimate that Egypt, which has been at loggerheads with Ethiopia over the construction of Grand Renaissance Dam, is keen to establish a consulate in Somaliland, and it believes that ties with Hargeisa will improve its influence within the Horn of Africa.

With Cairo keen to have Ethiopia's efforts to fill the dam stopped, its quest has suffered a huge blow following defiance by Addis Ababa, which enjoys the support of Somalia and Sudan. It is now clear if Egypt is planning to establish ties with Hargeisa as a "provocation" strategy".

Already, reports indicate that the administration of Prime Minister Abiy Ahmed has protested against the trip by Egyptian delegation to Hargeisa, which it terms as a recipe for "insecurity". Somaliland is strategic to Egypt in the feud with Ethiopia because Addis Ababa at times depends on the Port of Berbera for importation and exportation of products to the rest of the world.

However, details show that the plans for the visit might have started much earlier since Somaliland's Deputy Foreign Affairs minister Liban Yousouf Osman had visited Cairo in March which was followed by the trip by Egypt's deputy minister for Africa Hamdi Loza who visited Hargeisa in May.

"I had the opportunity to welcome the delegation from our brotherly country of Egypt led by deputy Minister for Africa HamdiLoza to the capital city of Hargeisa, in response to my visit to Egypt on March 25th. This is a good indicator for strengthening the ties of two countries," Liban had tweeted.

The trip by the Egyptian team comes barely a week after Somaliland formalized ties with the Republic of China which is commonly called Taiwan amid protests from both Beijing and Mogadishu. The two parties promised to boost each other in trade and diplomatic cooperation.

Also, Somaliland received another high-level delegation from Kenya in Hargeisa which was led by National Assembly Minority Whip Junet Mohamed. Sources said that Somaliland is keen to use Kenya's presence at the UN Security Council to push for its recognition.

Currently, Somaliland is in talks with Somalia over areas of cooperation and a ministerial committee handling technical issues has been meeting in Djibouti for the same. The team is expected to deliver a report to the leaders of the two states in the coming month.

On Tuesday, Inter-Governmental Authority and Development [IGAD] lauded the ongoing dialogue between Mogadishu and Hargeisa. The meeting had been brokered by Djibouti President Ismael Omar Guelleh and Ethiopian PM Ahmed Abiy last month.

"Commended the ongoing dialogue between the Federal Government of Somalia and Somaliland under the patronage President Ismail Omar Guelleh and Prime Minister Abiy Ahmed and look forward to progress reports of the technical committees that have been established to steer the parties towards an amicable solution," read a statement from IGAD on Tuesday.

Somaliland gained independence from Britain in 1960 but it merged with Somalia, an Italian colony a few days later to form the united republic of Somalia. However, the relationship deteriorated leading to an unprecedented break in 1991, following decades of brutality meted on its people by the rogue regime of Siad Barre.

In February this year, Somalia President Mohamed Abdullahi Farmajo formally apologized to the people of Somaliland for the atrocities committed by previous regimes. Both Farmajo and Bihi had met in Addis Ababa in a meeting which was organized by Dr. Abiy, who won the Nobel Peace Prize in 2019.