Ethiopian troops at army base in Somalia comes under Islamist attack 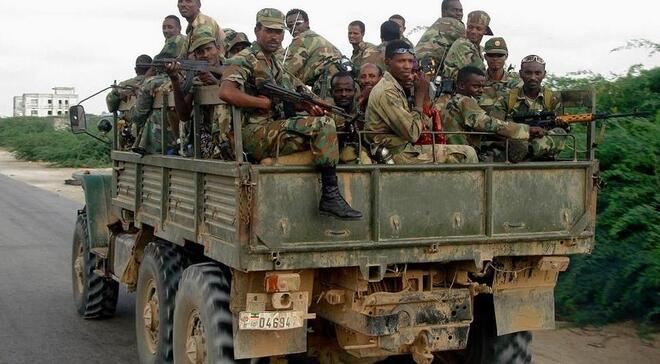 MOGADISHU, Somalia - For the second time within two months, a fierce gunfight ensued between Al-Shabaab militants and a contingent of Ethiopian troops in Somalia, signaling a looming crackdown against the militants in the coming weeks before the exit of AU forces from Somalia.

The Monday night incident saw the militants unleash mortar shells at the base, leading to the intensive gunfight at the Bay region in Southwest, an incident which also comes slightly a month after two Kenyan aircraft were attacked within the same region.

Armed to teeth, the militants fired several at the army base located between Bardale and Qansaxdheere, several miles from Southwest's regional administrative capital of Baidoa, multiple sources confirmed.

In response, the fairly equipped Ethiopian troops fired back at the militants, forcing dozens of them to flee from the scene, eyewitnesses said, with reports indicating that the heavy fighting left dozens dead.

Residents were also severely affected following the incident, with a good number fleeing from neighboring villages for fear of escalation. The area is densely populated by civilians thus fear for more fatalities.

The military base is within Sector III of AMISOM, which is manned by Ethiopian National Defense Forces [ENDF]. In recent weeks, there have been claims that a contingent of close to 1,000 Ethiopian soldiers have joined their counterparts in Southwest despite not being enlisted in AMISOM.

On May 4, the non-AMISOM contingent from ENDF admitted downing a Kenyan plane carrying medical supplies near Bardale airport. Last week, local officials also accused Al-Shabaab of shooting at another Kenyan aircraft at Qansaxdheere.

Until now, neither the ENDF nor the Al-Shabaab has issued a statement with regard to the latest fight. However, the ENDF rarely publish details about their operations in Somalia, which had been previously encountered public criticism over civilian deaths.

But last month, the troops released a rare statement about an encounter with Al-Shabaab, who had tried to ambush them between Gedo and Baidoa. At least four Al-Shabaab militants were killed during the incident, the statement read.

Although the troops have been credited along with their KDF counterparts of degrading Al-Shabaab in Jubaland and Southwest, they have, however, been linked to political squabbles bedeviling Gedo region, which the US warned that could "undermine" the fight against Al-Shabaab.

ENDF is accused of destabilizing the region by kicking out regional administrators and replacing them with those friendly with FGS. The move has contributed to unending political wrangles, with regional leader Ahmed Madobe accusing President Mohamed Abdullahi Farmajo of "plot" to oust him.

Details accessed by Garowe Online indicate that the ENDF is planning to launch the last and perhaps the most sophisticated assault against the Al-Shabaab within Jubaland and Southwest, but it's still unclear on when the operation will be carried out.

The Ethiopian military has similar bases in the nearby districts of Bardaale and Baydhabo, which is home to tens of thousands of Ethiopian troops. There are close to 4,300 ENDF troops in Somalia, which are also credited for flushing Al-Shabaab out of Mogadishu in 2011.