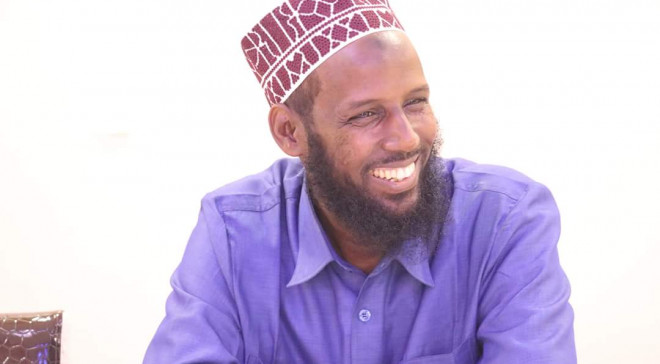 MOGADISHU, Somalia - Mukhtar Robow, the former Al-Shabaab deputy leader entered his fourth day of hunger strike in Mogadishu on Sunday, in what could spark fresh debate over his continued stay under house arrest, over two years since his arrest at Baidoa, the regional administrative capital of Southwest.

A government source told Garowe Online that the former Al-Shabaab leader refused to take food and that "he has now entered the fourth day". Robow was first arrested in December 2018 during final campaigns for Southwest presidential state elections.

Robow, the source noted, was decrying "his continued detention without justification by the federal government", adding that "authorities have remained silent over the latest matter which could trigger another round of protests in the country".

Further, the source said, "he has severally asked authorities to release him without success and believes that hunger strike is the last solution to his predicaments". Under international laws, a prisoner should have his or her rights safeguarded, including access to goods, water, and family.

Robow decamped from the Al-Shabaab and was received by the government after he differed with Ahmed Omar [Abu Ubaidah], the current Al-Shabaab leader over irreconcilable differences.

After that, he joined politics in his native Southwest, something which wasn't received well by authorities in Mogadishu since he was on the brink to become the leader of the Southwest state.

And to tame him, government troops and those from the Ethiopia National Defense Forces [ENDF] stormed his campaigns in the Southwest and arrested him, leading to chaos in the state. Over 11 people were killed in the deadly chaos.

Without pressing charges on him, the government has continued to hold him in a house controlled by the National Intelligence Security Agency [NISA], which is often accused of violation of human rights, torture, deaths, and disappearance of critics.

Sources privy to his arrest insist that he was overwhelmed and subsequently arrested after it emerged that he was the clear favorite to win the Southwest presidency. Outgoing President Mohamed Abdullahi Farmajo was keen to control all states.

The use of or collaboration of foreign troops is not strange in Somalia. Recently, it was reported that thousands of young Somali troops are training in Eritrea and there is a possibility that they participated in the alleged Tigray genocide, which left thousands dead.

But despite these serious allegations, the government has fairly remained silent, leading to speculations from stakeholders. A committee appointed by Prime Minister Mohamed Hussein Roble is also yet to table its findings over the matter.

A number of people have defected from Al-Shabaab due to financial constraints, change of philosophy, or persuasion from the government. Defectors have usually repatriated the society and are given preferential treatment.