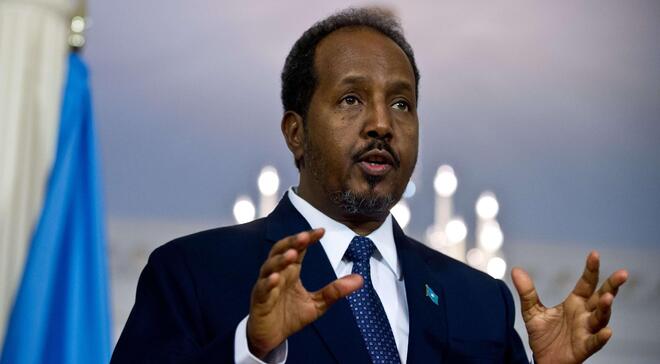 MOGADISHU, Somalia - Former Somalia President Hassan Sheikh Mohamud has yet again accused the current administration of failure to reform the country's judicial system, arguing that thousands of residents are now forced to seek justice in Al-Shabaab courts across the country.

For over a decade, Al-Shabaab has been fighting to topple the fragile UN-backed Somalia administration, but their efforts have been curbed by military forces especially those from the US Africa Command and the Africa Union, who work closely with the Somali National Army [SNA].

The group controls large swathes of rural central and southern Somalia, and it's in these regions that it imposes taxes on the people which help them to run their operations. The group carries small to large scale sporadic attacks across Somalia and in Kenya.

But Mohamud, who was president from 2012-17, said lack of operational judicial systems in the country has given Al-Shabaab more room to continue dominating in Lower Shebelle and parts of Jubba through the administration of justice to the people.

The people, he added in a press conference over the weekend in Mogadishu, are forced to seek justice in Al-Shabaab courts and the government has "done very little" to remedy this. The militants solve domestic disputes in even regions that are under the control of the government, he added.

President Mohamud who is also a presidential candidate said he made significant strides including writing the law to form the Judicial Service Commission and increasing public confidence in the judicial system during his tenure.

“Right now many people including government officials, traders, and civilians go to Torotorow to seek justice,” Mohamud said. The militant group Al-Shabaab presides over cases in its courts in Torotorow in the Lower Shabelle region.

His jibes against the current administration come amid concerns over the composition of the Electoral Committee team that is set to supervise elections. The opposition team accuses President Mohamed Abdullahi Farmajo of planting NISA agents, his loyalists, and civil servants in the team contrary to the law.

Dahir Gelle, another opposition leader, also accused Villa Somalia of failing to provide a "conducive" environment for credible elections. The Mogadishu conference was attended by 14 presidential candidates who have expressed interest to challenge Farmajo in upcoming elections.

Although Somalia lacks a functional judiciary, the country has been depending on Military courts to administer justice to offenders. But the military courts have been under pressure from civil society groups that accuse them of failing to give the accused person time for proper representation.

Similarly, the Al-Shabaab doesn't give the accused people the right to be represented by their legal team. The group has killed over 5,000 people in Somalia mainly security forces, government officials, government informers, and innocent civilians according to multiple reports by the United Nations.