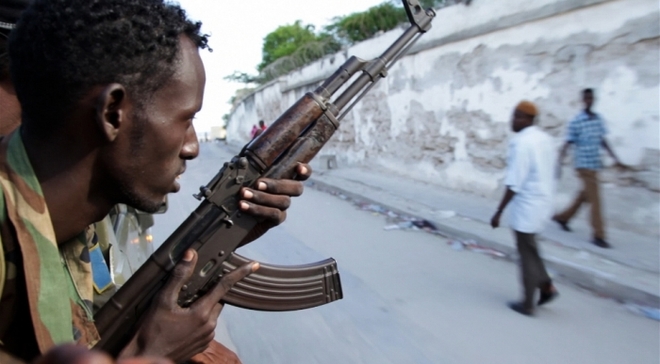 UNITED NATIONS (Reuters) - Somali army weapons and ammunition continue to be diverted to open markets despite the government's pledges to prevent its arms from leaking and ending up in the hands of Islamist militants, U.N. investigators said in a new report.

The Somalia-Eritrea Monitoring Group, an 8-member panel of investigators that monitors compliance with U.N. sanctions on the two countries, said there had been improvements in government reports on the contents of its armories but suggested the situation remained unsatisfactory.

"The Federal Government has not imported weapons into Somalia in full compliance with its obligations pursuant to the modification of the arms embargo by the Security Council," the group said in its confidential 482-page annual report, obtained by Reuters on Friday.

The report was submitted to the council's Somalia-Eritrea sanctions committee.

The 15-nation Security Council's decision to ease Somalia's decades-old arms embargo in March 2013 was a controversial one, although Washington supported the Somali government's appeals for restrictions to be relaxed to enable it to better arm its security forces to fight al Shabaab.

Earlier this year, the council extended a partial suspension of the decades-old arms embargo on Somalia for eight months while highlighting concerns about the possible diversion of weapons to al Qaeda-linked al Shabaab militants. The government has pledged to crack down on arms diversion.

In their new report, the monitors said a number of assault rifles provided by Ethiopia and stored at the Halane armory had ended up for sale on the streets of the Somali capital.

It added that the weapons were "undeniably sourced from SNA (Somali army) stockpiles" and noted that arms dealers selling them had confirmed that they came from government stockpiles.

"Arms dealers also stated that al Shabaab agents were procuring weapons in at least one of the markets," said the report, noting that the monitors had viewed an al Shabaab propaganda video in which a militant was cleaning a brand new Type 56-2 assault rifle.

"The Monitoring Group can only conclude that the weapons were sold illegally by SNA officers taking advantage of poor accountability at the unit level, or that these weapons have been leaked at a higher level and the SNA's supporting documentation has been doctored or manufactured as cover for missing weapons," the report said.

It added that the group has consistently received testimony from individuals about high-level Somali involvement in direct transfers of the arms to markets and to al Shabaab.

Other weapons have wound up on the markets of Mogadishu, including different assault rifles with filed-off serial numbers. Arms dealers in the markets said the weapons came from the Somali army and had originally come from Yemen.

The group said that since the partial suspension of the arms embargo, the various weapons Somalia has imported exceed 13,000 along with 5.5 million rounds of ammunition.

"Given the size of the Security Forces ... these numbers of weapons exceed the needs of the current offensive against al Shabaab," the report said. "They are also additional to weapons sourced locally from stocks already in the country and weapons that have entered Somalia in violation of the arms embargo."

A diplomat at Somalia's U.N. mission did not respond immediately to a request for comment.

Somalia's government last year had asked for the arms embargo to be fully removed, and the United States supported that. But other Security Council members were wary of doing that in a country already awash with weapons.

The Security Council imposed the embargo on Somalia in 1992 to cut the flow of weapons to feuding warlords, who a year earlier had ousted dictator Mohamed Siad Barre and plunged the country into civil war. In 2012, Somalia held its first vote since 1991 to elect a president and prime minister.

The Security Council requires Somalia's government to report regularly on the structure of the security forces and the infrastructure and procedures in place to ensure safe storage, maintenance and distribution of military equipment.

There is a 17,600-strong African Union peacekeeping force and a U.N. political mission in the Horn of Africa country. The African Union force continues to fight al Shabaab.