Farmajo: I am determined to hold free and fair elections 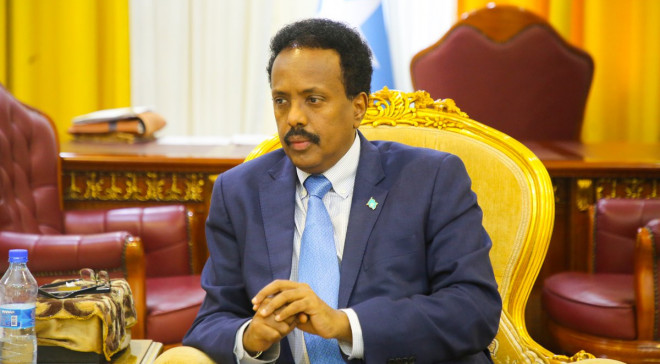 MOGADISHU, Somalia - President Farmajo has once again pledged to facilitate a free and fair election in Somalia, amid growing pressure from members of the international community, who are determined to ensure the electoral impasse is solved in the country as soon as possible.

The country is set to hold presidential elections on February 8, but the push and pull among local leaders have delayed the process, leading to concerns from members of the international community, who are keen to have the country moving forward after months of stalemate.

While meeting envoys on Saturday, Farmajo, who is seeking reelection, said he's determined to hold free and fair elections, adding that his sole responsibility is to ensure the constitution is followed to the latter and spirit.

To guarantee this, he noted, the decision to meet Federal Member States leaders and reaching an agreement, the approval of elections law, and the formation of independent polls body was an indication of his commitment to hold elections in time.

"H.E Farmaajo assures members of the international community including Somalia based Envoys of his Government's commitment to upholding the electoral agreement signed on 17 September 2020 as ratified by the Federal Parliament of Somalia," Villa Somalia said in a statement.

"The President termed the progress made in the preparation of the polls as a sign of his administration's willingness to fulfill free, fair, and transparent elections. This included the FGS-FMS agreement, approval of elections law, formation of Independent polls body and budget approval," it added.

But later on Saturday, President Mohamed Abdullahi Farmajo said he's committed to holding free and fair polls, adding that he will be meeting all stakeholders in Samareeb for the next three days from Monday, something which will define the country's future.

"As part of our efforts on the Sept. 17 elections agreement, I will have a 3 days consultative forum with FMS Leadership in Samareeb from 1st to 3rd Feb 2021. On 5th Feb, I will address the two Houses of Federal Parliament on our national progress especially on Federal elections."