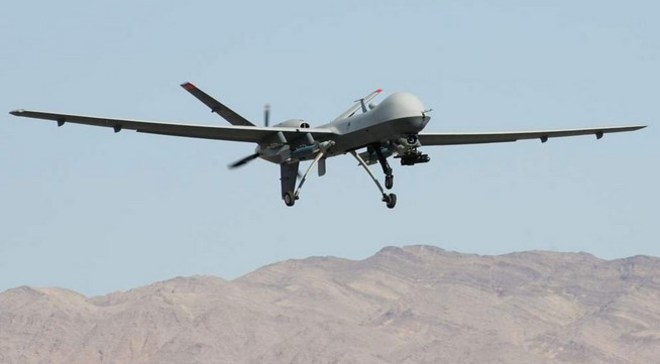 MOGADISHU, Somalia - The US military conducted the second drone strike in coordination with FGS in Janaale on Tuesday, AFRICOM said, adding to growing numbers of raids against Al-Shabaab in Somalia.

By Tuesday, the US Africa Command had conducted a total of 26 airstrikes in Somalia, mainly targeting central and southern regions of the war tone nation, the highest within the same period in previous years.

On Monday, the military launched an airstrike within Janaale, killing four suspected Al-Shabaab militants, AFRICOM had reported, in what analysts believe is a "change of strategy" after years of Al-Shabaab dominance.

Initially, residents have blamed the military for targeting innocent people, but AFRICOM said, "We currently assess no civilians were injured or killed as a result of this airstrike".

The number of airstrikes this year have surpassed those waged by the US against ISIS in Iraq and Syria, thus showing the new significant approach taken by Washington over Somalia.

In 2019, the US military conducted a total of 63 airstrikes in Somalia. A report by the UN indicated that the airstrikes have forced Al-Shabaab to abandon strategic remote villages for urban centers.

“Not only do they degrade al-Shabaab’s ability to conduct violent activities in the region, but they illuminate the fighter network and impede the al-Qaida affiliated terrorist organization’s ability to recruit and export terrorism.”

Janaale is located in Lower Shebelle and it is under Al-Shabaab control. A fortnight ago, over 20 SNA soldiers were killed following a raid at El-Salini military base, officials said.

The progress comes just days after Pentagon confirmed the death of Bashir Qorgab, a senior Al-Shabaab commander who had been killed in an airstrike at Saakow last month.

Al-Shabaab has been earmarked as "dangerous Al-Qaida associates" in East Africa by the US, leading to frequent airstrikes meant to degrade them, Gen. Stephen Townsend had said.

Currently, there are over 22,000 peacekeeping troops in Somalia, with the US also having over 500 special forces in the region. The peacekeepers are set to tentatively leave by the end of next year, AMISOM said.

The US said that "we remain committed to Somali-led progress on improving conditions for a well-trained SNA that can assume and sustain security within the country".

Dealing with Al-Shabaab menace in several parts of the country, Somalia has also worked with international partners to push for debt relief as part of efforts to build a formidable and functional state.

In December, the country will go for the first universal suffrage polls, explaining the commitment by partners to ensure dialogue between the FGS and federal states takes place in time.

America is one of the partners who have warned against political intrigues which could catalyze a resurgence of Al-Shabaab militants in the region despite significant victory against them.

Statistics from the UN indicate that over 4,000 people mainly innocent civilians have been killed since 2008. The militants finance their activities through "mafia-style" taxation, UN Panel of Experts report observed.