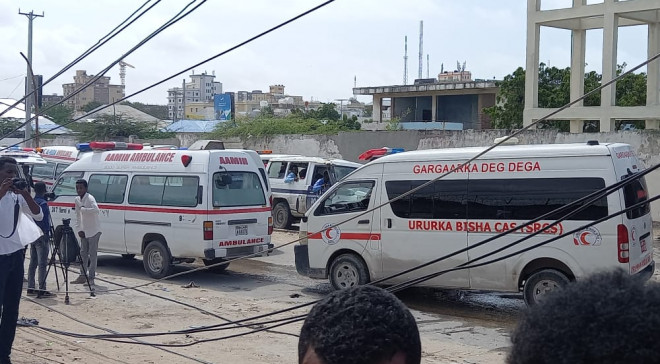 MOGADISHU, Somalia - A top police commander survived a serious bomb blast in Mogadishu, the capital of Somalia, officials said, in an attack that comes barely three months after he took over security responsibilities in the Horn of Africa nation.

Colonel Farhan Mohamud Adan alias Qarole, was targeted by a huge explosion in Banadir junction within the capital, but he managed to escape unhurt, sources said. It's the first major attack targeting a senior government official in as many months.

Police sources said at least five of his security guards died on the spot, while others were seriously injured. It's not clear where the police boss was headed to but Saturdays are normal working days in Somalia where most citizens subscribe to Islam.

Photos taken from the site painted pictures of a deadly explosion that dismantled several vehicles and the surrounding vicinity, leaving wreckages behind. The Somali government is yet to issue an official statement with regard to the blast.

While no group is yet to take responsibility, such attacks are synonymous with the Al-Shabaab group, which controls large swathes of rural central and southern Somalia. The group often targets senior government officials, security forces, and at times, innocent civilians.

Colonel Qarole was appointed in April after his predecessor Brigadier General Sadik John was fired after he opposed term extensions for Farmajo's term. The rebellion forced the president to allow talks on the conduction of elections in the country.

Col Farhan Qarole was an Al-Shabaab defector, a further indication of why the group may have targeted him. The Al-Shabaab often seeks to revenge against members who support the government agenda through defections.

The Al-Shabaab militants have suffered immense defeats in recent months following an operation by the Somali National Army [SNA], which is keen to topple the group from its traditional strongholds. The country has been struggling with instability for three decades.