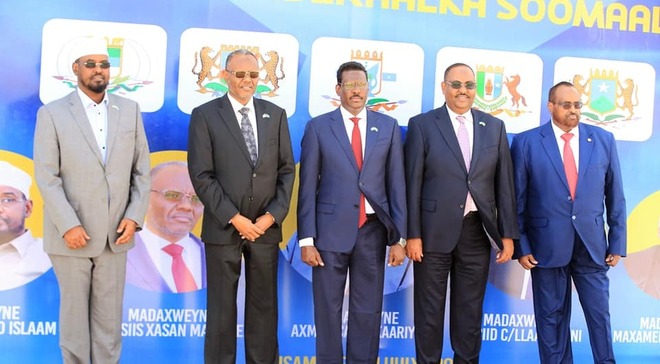 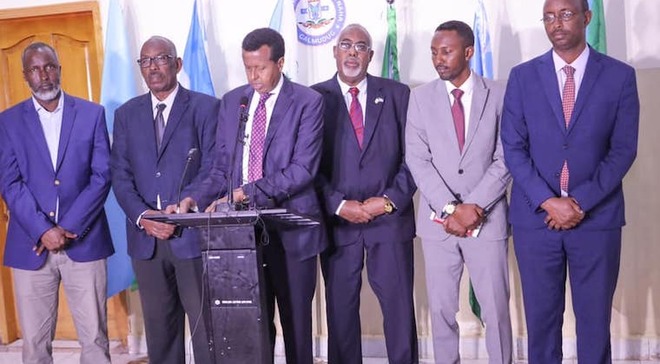 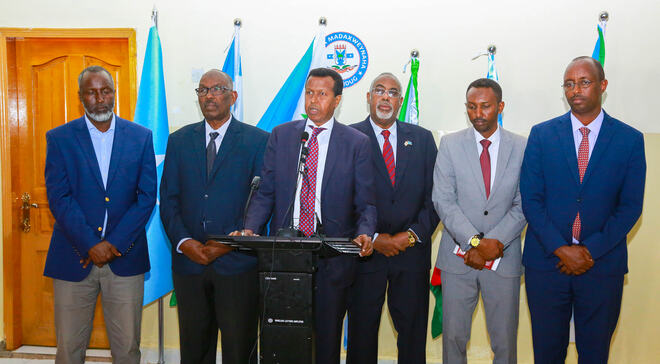 MOGADISHU, Somalia - Somalia is not ready for a one-person-one-vote election this year, regional leaders said on Sunday in a statement citing "limited" time before the much-anticipated polls, in a move which would throw all stakeholders to the drawing board in coming weeks.

Five leaders representing all federal states had convened in Dhusamareb, the regional administrative capital of Galmadug, but there were no representatives from the federal government of Somalia, an indication of the brewing political crisis which could destroy gains made by the country with the help of the international community.

In a joint communique, the five leaders termed holding of universal suffrage polls within 2020 "practically" impossible but called for political negotiations with FGS to find a middle ground, which would prevent term extensions for the current administration whose tenure lapses in November.

The universal suffrage model, they argued, would lead to term extensions contrary to the provisional constitution which governs the Horn of Africa nation. To solve the quagmire, they added, an alternative model that is "acceptable" to all must be crafted in the coming weeks.

A fortnight ago, the National Independent Electoral Commission [NIEC] under the stewardship of Halima Ismael Yarey also ruled out universal suffrage polls this year but seemed to be satisfied with the model, a move which irked the opposition and regional leaders.

The commission insisted that it needs time, probably until March next year, to deliver a manual one-person-one-vote election, a proposal which was welcomed by international partners. For a biometric election, the commission said, Somalis would have to wait for another five months until August 2021, further leading to extension of the current term.

But in Dhusamareb, regional leaders asked President Mohamed Abdullahi Farmajo and Prime Minister Hassan Ali Kheire to ensure another urgent meeting is convened to broker truce on the date and model for Somalia's elections. The meeting, they added, should be held in Dhusamareb.

The FGS is yet to issue a statement but it had highlighted elections, security, and development as some of the key agendas for a meeting with federal member states. The meeting had been scheduled for last Sunday in Mogadishu but was called off after some states accused Lower House of enacting electoral legislation without consultations.

Abdinur Mohamed, the Villa Somalia spokesman, had indicated that the FGS would hold the meeting at the "appropriate time" but failed to give a hint on the probable date. Farmajo has been under pressure to have the stalemate fixed in time for a "proper" transition.

Last week, Khaire, who is believed to have fallen out with Farmajo, said the country has no option but to hold "timely" elections as stipulated in the constitution. Farmajo had earlier insisted that the country must hold universal suffrage polls, a move that was supported by international partners but has failed to attract the opposition which sees it as a strategy to extend the term.

The leaders also agreed to have mutual cooperation with the central government for the sake of jump-starting their economies which have struggled for decades. FGS and FMS, they said, should find synergy in boosting security across all the regions in Somalia.

Previously, Somalia has embraced the clan-based model which is at times referred to as the 4.5 system. Lawmakers are voted by clan elders before they elect a president from among contestants, but the model has often been criticized for entrenching the country into unfathomable marginalization.

Heritage Institute of Policy Studies, a Mogadishu-based think tank, had also ruled out universal suffrage elections this year, further proposing an expanded model, which would see the number of electors increased from the current 14,025 to around 221,000 in the coming elections.

Afyare Elmi, a renowned analyst, and associate professor pointed at indirect polls and term extensions as the most contentious issues in Somalia, adding that divisions are emerging within government, which could further derail elections or plunge the country into chaos.

"When it comes to Somalia electoral politics there are two positions: Indirect election vs term extension. Statements from FMSs, opposition, PM, and some MPs support first while statements from the presidency, many MPs, and NIEC support the latter. The IC is confused," he noted.

The country is struggling with dark days of inter-clan conflicts and the unending Al-Shabaab menace, which have stifled efforts to restore normalcy in the Horn of Africa nation. Farmajo is keen to defend his seat but has been under immense pressure from his predecessors Sharif Sheikh Ahmed and Hassan Sheikh Mohamud.