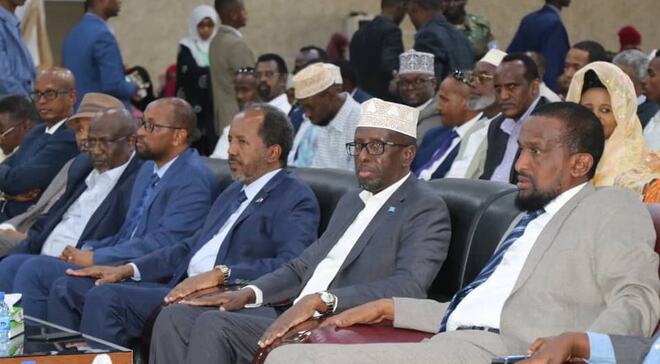 MOGADISHU, Somalia - Ethiopia has been accused of engineering political quagmire in Somalia through the deployment of non-AMISOM troops, with the Forum for National Parties [FNP] now calling for auditing of African Union troops in the troubled nation.

In a statement issued on Monday, the FNP, which is a conglomerate of six opposition parties, also lauded the United Nations Security Council [UNSC] of "extending the mandate of AMISOM in Somalia until 2021 to allow free, fair and transparent elections."

The African Union troops are formally supposed to withdraw from Somalia in 2021 under Somalia Transition Plan. In a recent meeting, the UNSC specified that the AMISOM troops should not exceed 19,626, a move which FNP termed gratefully.

But currently, there are slightly more than 21,000 foreign troops in Somalia, with Ethiopia accused of deploying non-AMISOM contingent, which is accused of among others, working with the Federal Government of Somalia to "destabilize" member states.

The FNP under the stewardship of former Presidents Sharif Sheikh Ahmed and Hassan Sheikh Mohamud, now wants UNSC and African Union to urgently "investigate the presence of non-AMISOM Ethiopian troops in Somalia".

The Growing number of Ethiopian National Defense Forces [ENDF], it said in a statement, "amounts to blatant violation of UNSC resolution 733 [1932] which imposed an arms embargo on Somalia. It's also a violation of sovereignty, territorial integrity, and Political independence of Somalia."

For months now, there have been increasing calls over the alleged cross-border movement of ENDF through Gedo to Somalia, but Addis Ababa and Mogadishu have remained mum about the activities of the non-AMISOM contingent in Somalia.

Last month, AU admitted the presence of non-AMISOM troops from Ethiopia in Somalia, following the downing of a Kenyan aircraft in Bardale. The troops "inadvertently" shot down the plane, leaving six people dead, Addis Ababa had said in a statement.

But FNP insists that Ethiopia had a "long ugly" history of destabilizing Somalia for "transient political gains". The FGS has been closely supervising the activities as a strategy to continue staying in power, it added.

In the past few months, it added, "ENDF troops have illegally entered Somalia ostensibly to destabilize Jubaland state by fueling local conflicts in Gedo and elsewhere." "Ethiopia has been using similar tactics throughout the country for decades to create discord among Somalis and to prolong state failure."

In February, FGS deployed Somali National Army [SNA] troops to the Gedo region, leading to an unprecedented gunfight with Jubaland regional forces. The move was condemned by both the US and the United Nations, who insisted that it would pave way for resurgence of Al-Shabaab militants.

Over the weekend, the FGS "recognized" Jubaland President Ahmed Madobe for the first time since August last year, but insisted that he will serve as a transitional leader for the next two years, commencing the period he assumed his second term.

But in a statement on Monday, Jubaland, which has been the epicenter of the conflict, dismissed Villa Somalia's latest move, terming it "illegal and unwelcome". Madobe, it added, will serve his four-year term before retiring from regional politics.

FNP said the UNSC should now consider to independently verify the presence of non-AMISOM troops from Ethiopia in Somalia, adding that an action should be taken immediately to avert a possible conflict in the coming months.

"The UNSC should independently verify the presence of non-AMISOM troops. It should take actions to ensure Somalia's sovereignty, territorial integrity and political independence remain inviolable," read the statement, adding that the party is grateful for UNSC push for dialogue between FGS and federal states.

In 2011, the Ethiopian non-AMISOM contingent was accused of engineering several deaths of civilians in Mogadishu in the pretext of fighting Al-Shabaab militants. The incident is yet to be investigated by the international community.

And in 2018, the troops were also linked to skirmishes in Baidoa, the regional administrative capital of Southwest state, following the arrest of former Al-Shabaab deputy leader Mukhtaar Robow. The FGS and Ethiopian team, local reports indicate, was not comfortable with Robow's quest for a regional presidency.