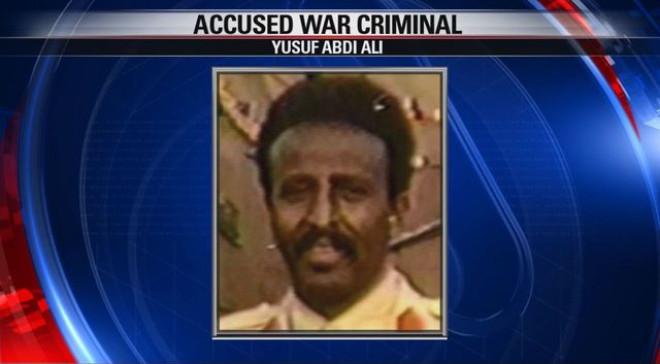 MOGADISHU, Somalia - A former high-ranking member of the Somali National Army [SNA] has been arrested in the United States over an alleged violation of human rights against Somali civilians in the 1980s during the reign of dictator Siad Barre, who was ousted about three decades ago.

Yusuf Abdi Ali was arrested by the Homeland security team in Springfield, Virginia, and investigations sleuths announced on Friday over the alleged human rights violations. He was popularly known as Tukeh according to those close to him.

He's accused of extrajudicial killing; torture; cruel, inhuman, or degrading treatment or punishment; and arbitrary detention, Homeland Security said. He is one of the very many army officers who are being pursued several years later over atrocities committed during Siad Barre's era.

Ali, who is now 69, served as a Lieutenant Colonel in the Somali National Army and as the Commander of the most feared Fifth Brigade at that time which was based in Northwest Somalia. He served in the position for two years from 1987 to 1988.

During that time, the Somali army committed numerous serious human rights violations against civilians, according to Homeland Security. Mogadishu was at war with the breakaway region of Somaliland at that time.

“While Yusuf Abdi Ali’s apprehension cannot undo the pain that he allegedly inflicted upon the victims of his purported human rights abuses, it is my sincere hope that by seeing him answer for his apparent role in these heinous crimes, they will be given some form of peace,” said Derek W. Gordon, Acting Special Agent in charge of HSI Washington, D.C.

“HSI Washington, D.C. is dedicated to protecting the law-abiding residents of the Washington, D.C. Metro area, while continuing to search out those who intend to benefit from the abuse of others.”

A jury in the Eastern District of Virginia found Ali liable in a civil suit in 2019 for the torture of a Somali herder and awarded the plaintiff damages, the Associated Press reports. Ali previously drove for Uber and Lyft in Virginia, according to reporting by CNN.

Police identified the victims as 40-year-old Elise Wars and her 4-year-old daughter Khori Ashton. The two were staying at the hotel since at least June. Many soldiers fled from Somalia after the collapse of Siad Barre's administration in 1990.