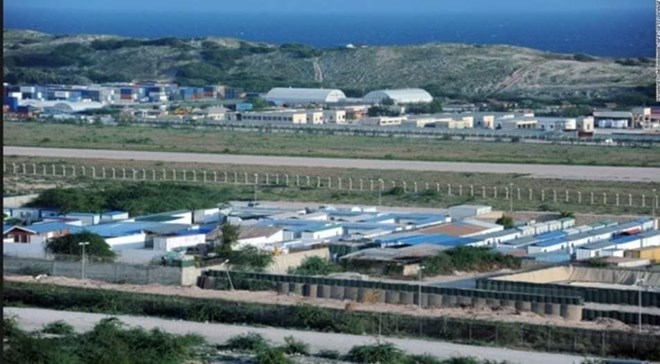 MOGADISHU, Somalia - For the second time within a fortnight, the violent Al-Qaida linked group, Al-Shabaab, fired mortar shells to the heavily fortified Halane Base Camp in the outskirts of Mogadishu, leaving four people dead.

The seven mortar shells which were fired in quick succession from an undisclosed location, targeted the AU military base and several Western mission diplomatic offices in Mogadishu, a move that could force security forces to change strategy.

Halane Base Camp is also located near the Aden Adde International Airport, which is the largest entry point to Somalia by air but has had its operations temporarily suspended due to the COVID-19 pandemic that continues to wreak havoc in the war-torn nation.

Four members of the same family died instantly within the vicinity of the facility after being caught up during the melee, eyewitnesses told the Garowe Online, with the mortar shells hitting their house near the base.

Activities within Halane Base Camp have temporarily halted a fortnight ago after Somalia recorded a significant surge of the COVID-19 cases. Some military officers have been using the base for treatment of extreme cases, sources said.

Police moved on expeditiously to secure the scene after the explosions, besides moving the bodies for burial. Security has since been beefed up in the facility and strategic areas within its vicinity, officials said.

Through their proxy media, Al-Shabaab took responsibility for the latest raid, adding that "our Mujahedeen conducted a successful operation against our enemies". But unlike in previous releases, the militants did not issue their estimated number of casualties, which is at times used to spearhead their extreme agenda.

But the attack could further fuel tensions within the Al-Shabaab following the death of civilians, who it had previously apologized for terrorizing. The group strictly claims that it's agenda is to "protect" the public.

In February, intelligence reports indicated that the group's de facto financial controller Mahad Karate was fired along with Bashir Qorgab, after raising complaints about the civilian casualties in December. 28 explosion which left over 90 people dead.

However, Ahmed Omar Diriye, the group's leader, released a rejoinder accusing the two of internal sabotage. Days later, Bashir Qorgab succumbed after being hit with a US drone in Saakow, AFRICOM said in a statement.

On April 20th, the militants fired nine rounds of mortar shells to the same base, which left three civilians badly wounded. The attack, AMISOM said, "was a disruption of serious efforts in the war against Coronavirus".

Al-Shabaab lost control in the capital, Mogadishu in 2011 after almost four years of brutal murders and violent executions, as it sought to topple the fragile UN-backed Somalia government.

But in recent days, the group is making inroads to the port city, coupled with frequent raids especially against the AMISOM base, a move which would test the capacity of the federal government to tame it from taking over once AMISOM exits in 2021.

Also at risk is the security of the Aden Adde International Airport, which is a major source of finances for the federal government. The airport is among the few income-generating facilities owned by the people of Somalia.

On Friday, the militants had their attempted raid against an AU forces base in Barawe town thwarted. Special Forces from UPDF fired at two VBIEDs just outside the base and a local airport, effectively managing the situation.

"The UPDF in Somalia has been commended by the community for securing Barawe Airport by giving a bloody nose to the attackers. Mopping up operations continue," said Brig. Richard Karemire, the UPDF spokesperson.

While Al-Shabaab can wage deadly small to large scale sporadic attacks, the group has been significantly degraded due to frequent US airstrikes and ground combats waged by SNA and AMISOM in Somalia.