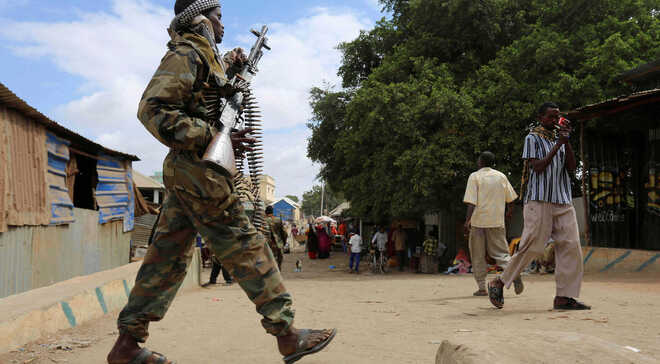 MOGADISHU, Somalia - A joint operation by Somali National Army [SNA] and Puntland Security team left an Al-Shabaab operative dead on Saturday, with reports indicating the victim has been on the run for a couple of years now.

Mohamed Hassan Farah was gunned down by security forces in the vicinity of Galkayo town, which has been an epicenter of fierce gunfight involving security forces, clan militia, and the Al-Qaida linked group.

In a statement published by Puntland security forces, a pistol, five cellphones, and several explosives were recovered from Farah, whose body was displayed for public viewership within the town which is found in the troubled Mudug region.

"The commandos managed to kill Farah after some minutes of a gunfight. They recovered a pistol, cellphones, and explosives," read the statement on Twitter. "He was displayed for the public given that this was a tremendous achievement."

Farah, security forces said, is linked to a number of violent activities including the recent death of Mudug Governor Muse Nur, who died along with four aides after their vehicle was blown by an IED within Galkayo town last month.

Also, the forces added, the slain terrorist has been coordinating retaliatory attacks against SNA troops within Galkayo in recent weeks through the detonation of explosives targeting military convoys. The troops have been camping in the region in an effort geared towards eliminating the militants.

Special Forces from Danab's 21st company played a major role in the onslaught, which Puntland forces said was "effective" and gateway to much-needed peace and stability in Mudug, a region which has been witnessing fierce battles in recent months.

The militant is also linked with forced taxation and collection of intelligence from the region and has been on the radar for months now, officials said. He's the fourth most wanted Al-Shabaab fighter to be killed this year, reports indicate.

In February, the US troops killed Bashir Qorgab, a top Al-Shabaab commander whom the State Department had placed $5 million bounties on him. The militant, who was killed in an airstrike at Saakow, was associated with the Jan. 5 attack at Manda Airfield in Kenya, which plays host to Marine Corps.

Later, a similar airstrike in Bush Madina killed Yusuf Jiis, another Amniyat operative within Lower Shebelle according to the US Africa Command. Also killed was Muse Moalim, who was killed by Al-Shabaab just a month after defecting.

But despite relentless operations by allied forces against Al-Shabaab, the group still remains a huge threat to Somalia's quest for peace and stability, a move which has led to persistent calls by the international community to have Somalis playing a role in the elimination of the threats.

The worst hit by Al-Shabaab militants raids is senior government officials and security forces. On Saturday, the militants also killed at least five Ethiopian troops in the vicinity of Bardale within Southwest after their vehicle bumped into a landline, reports indicate.

The attacks come at the time Somalia is struggling to strike a compromise for the much-needed elections this year. Already, President Mohamed Abdullahi Farmajo has supported a one-person-one-vote model, which is facing resistance from sections of the opposition team which prefer the clan-based model.

For the better part of Sunday, both pro and anti-government supporters took to streets of Mogadishu to defend their positions following the re-opening of parliament. They had differed over the content of Farmajo's speech.