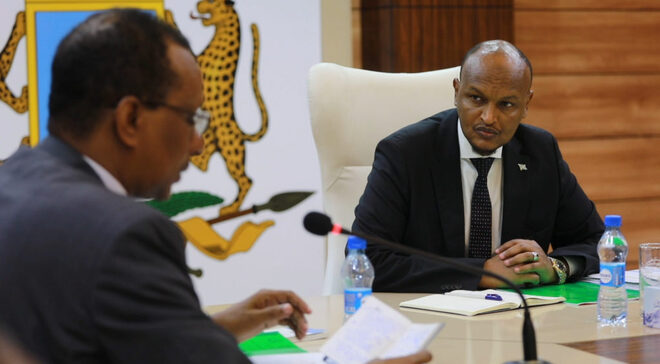 MOGADISHU, Somalia - At lease 12 prison guards have been arrested following the Al-Shabaab attack at Central Prison last week, a senior government official said, adding that the decision came after days of investigations conducted by the Federal Government of Somalia.

The attack at the largest correctional facility left 15 inmates dead and four prison guards, the government said. Preliminary investigations had indicated that one inmate grabbed a gun from a prison guard before starting to fire indiscriminately, occasioning a standoff.

Thereafter, initial reports showed, some inmates attempted to run from the prison but were overpowered by the guards. One notorious prisoner is said to have made his way out of the cells, which host dangerous criminals, some of them former Al-Shabaab fighters.

But Justice Minister Hassan Hussein confirmed that the weapons were smuggled to the facility after some officials colluded with the suspected members of Al-Shabaab. Of the 15 inmates who were killed, at least 14 of them were Al-Shabaab convicts, he added.

Hussein said that the weapons were delivered into the prison in two batches. According to investigations, he added, the weapons were hidden inside the meat and a sack of orange delivered to the Al-Shabaab inmates on Aug 8 and 10, days before the attack.

"We have established that the weapons were smuggled into the prison in two batches. It must have been an inside job and action has since been taken," he said, adding that: "Someone must take responsibility and this is what we must ensure happens for the sake of our safety."

He insisted that the government will continue cleaning the correctional facilities to ensure they're tamper-proof from outsiders who have been antagonizing the people of Somalia. He did not, however, name those arrested for further investigations.

A committee that had been put in place to investigate the incident said that 12 guards including the commander of the Central Prison and his deputy were arrested for "facilitating and, or neglecting" their duties, something which led to infiltration into the correctional facility.

Besides the 12 government officers, the committee added, six civilians were also arrested for aiding the attack by helping in smuggling of the weapons to the facility. At least nine inmates have also been implicated in playing a role in facilitating the attack.

Last Monday, Brig. General Aden Hussein Kulmiye, the warden of the prison has been suspended and a temporary successor to take his place was appointed following the deadly riot.

The incident adds to a host of rising insecurity within the Horn of Africa nation which has been struggling to foster peace and stability. In fact, a senior District Officer and some soldiers were recently arrested for allegedly aiding the Al-Shabaab attack at a Mogadishu hotel, which left several people dead.