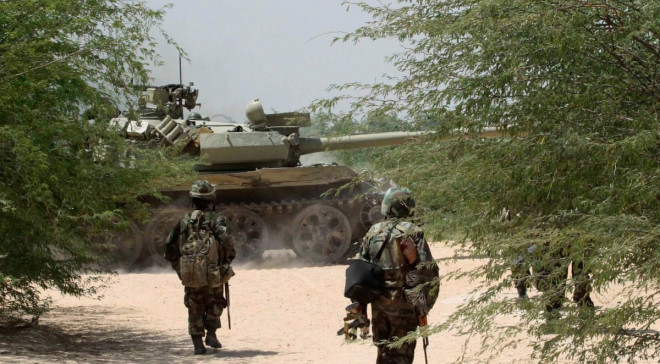 Ugandan peacekeepers from Amisom in Somalia, where dozens were killed on Sunday. Photograph: Feisal Omar/Reuters

MOGADISHU, Somalia - A gunfight exchange between Al-Shabaab militants and the African Union Mission Forces [AMISOM] from Djibouti left three children from the same family dead, in what could yet again trigger condemnation in the Horn of Africa nation.

Reports indicate that Al-Shabaab militants fight AMISOM troops from the Djiboutian contingent in Beledweyne, central Somalia, leading to the death of three children from the same family in Somalia.

According to multiple sources, Al-Shabaab fighters fired mortar shells at the Djibouti forces military base in Howl-wadaag area sparking a fight between the two sides. It's not the first time the militants are targeting military bases in the country.

The Mortar shells landed in the family of the two siblings killing them and injuring others, sources added. It's the Al-Shabaab mortars that killed the children and not the bullets from either side, reports indicate.

Already, the situation has been controlled but authorities from the town and the Djiboutian military are yet to issue a public statement with regard to the matter. However, the Al-Shabaab militants have since taken responsibility for the attack.

The Djiboutian contingent has been operating in the region for almost a decade under the African Union Peacekeeping mission. The mandate of the soldiers will expire later on this month but there are plans to reconfigure them for a joint mission with United Nations.

Cases of civilian deaths in Somalia are common in such circumstances, with the latest taking place in Lower Shabelle. Already, three Ugandan soldiers have been slapped with a death sentence after it emerged that they killed seven civilians who didn't have affiliation with Al-Shabaab.