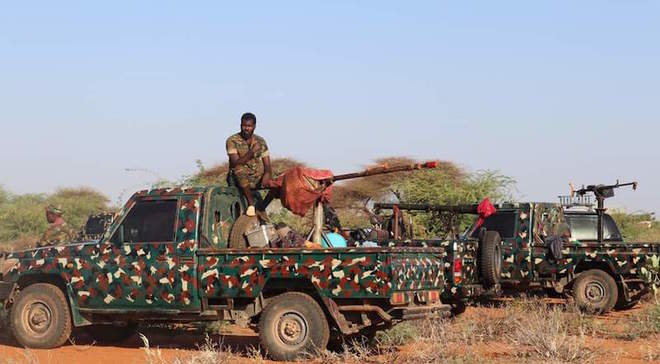 NAIROBI, Kenya - The internal crisis between Jubaland administration and FGS within the Gedo region could escalate to a serious fallout among peacekeeping forces, a section of leaders have warned.

Located in the Western part of Somalia, Gedo has emerged as the battleground for the UN-backed federal government and regional leadership of Jubaland, with a number of issues informing the crisis.

While Jubaland accuses FGS of "naked aggression", both parties have vowed the defend the region, forcing residents to flee from Balad-Hawo and Dolow, the major districts of Gedo.

Interestingly, the American-trained Danab forces have not been involved, indicating the US' absence from onslaught against Jubaland.

Gedo invasion, a puzzle for AMISOM

Gedo region has been used as a special buffer zone in the fight against Al-Shabaab, which still inflicts deaths across East Africa.

Both Kenya and Ethiopia military, who have been instrumental in the Al-Shabaab war, are stationed in Jubaland, a state that is currently at loggerheads with President Mohamed Farmajo's administration.

While KDF troops have worked closely with Jubaland, the FGS is closely working with Ethiopian troops, a move that could degenerate to an irreconcilable fallout among the involved troops.

Rashid Abdi, a security expert, believes the invasion of Jubaland is a strategy to bring down, Ahmed Madobe, the powerful regional president.

"All indications planned ops in Gedo political, not counterinsurgency. Aim to bring down Madobe," said Abdi, adding that "I hope KDF will not respond because it could be catastrophic."

The analyst further says the actions by the federal government, could brew a war between Somalia and Kenya, which have peacefully coexisted for decades.

The ongoing aggression, besides triggering a possible fallout within AMISOM, could also pave room for more Al-Shabaab attacks, pundits have said.

Al-Shabaab militants have intensified sporadic attacks within Somalia, killing dozens of people in the process. Jubaland is worst affected by frequent raids.

Mr. Abdi observes that "the more Kenya, Somalia, and Ethiopia become entangled in adversarial regional side-battles, tussling the greater the likelihood that will create greater space for Al-Shabaab."

Already, Somalia has warned Kenya against "interference of our internal politics" adding that "this could affect our relationship".

The differences between the three nations were manifested during Jubaland polls, in which FGS and Ethiopia openly opposed Madobe's re-election. Through the Foreign Affairs department, Kenya acknowledged the victory.

"Three countries must iron out the difference and focus on a greater enemy or else jihadists will overrun all," says Abdi, who has been critical of Mogadishu administration.

There were reports of a fallout between KDF and ENDF, who man sections of Jubaland in August last year. Kenya had accused Ethiopia of fueling internal rebellion by supporting the FGS agenda.

Aw Hirsi, a former Jubaland planning minister, who has since shifted his allegiance to Mogadishu, at least through his tweets, also predicted an Al-Shabaab infiltration.

"This tension makes the lives of civilians on both sides difficult, might benefit Al Shabaab terrorists," said Hirsi. "Also, let me reiterate, Gedo is faithfully married to Mogadishu, just like Mandera is to Nairobi."

Opposition's take on the crisis

Abdirahman Abdishakur, the Wadajir party leader, has warned about the infiltration of Al-Shabaab, over the ongoing crisis.

In a tweet, Abdishakur said that by neighboring countries taking sides, and with the silence of the international community, the matter could pave way for Al-Shabaab's resurgence.

"The fighting btw forces of FGS and Jubbaland troops, the involvement of neighboring countries that support the two sides and the silence of the international community are all a victory for Al-Shabab," he said.

He added that the standoff would be a "setback the war against terror" and potentially ignite a conflict in the region that has enjoyed relative stability.

Farmajo has been on the spot with the opposition and dozens of stakeholders accusing him of destabilizing federal states by plotting to "impose" his loyalists ahead of December polls.

Not only Jubaland, but states like Puntland, Southwest, and Galmadug have also borne brunt of the onslaught, a move that could further destabilize Somalia.