How Jubbaland could determine Kenya-Somalia relations 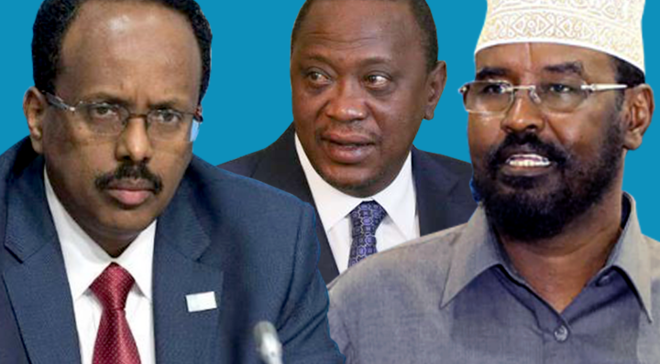 EDITORIAL | Somalia was this week celebrating the resumption of direct flights between Mogadishu and Nairobi, becoming the best news between countries that have been going for each other’s throats lately.

But amid that celebration, details emerged of how Ethiopian Forces were ‘taking over’ Gedo region in Jubbaland state, repeating what a UN Panel of Experts claimed recently as Ethiopia’s overreaching in Somalia’s internal affairs.

The flight resumption was the fruit of successful face-to-face talks between Kenya’s President Uhuru Kenyatta and his Somali counterpart Mohamed Abdullahi Farmaajo. With that, visas on arrival and flights without unnecessary security stopovers were resumed.

That Somalia and Kenya hadn’t been in good terms was because of a maritime boundary dispute now at the International Court of Justice. But it now appears the key cog in Kenya-Somalia relations lies in Jubbaland.

This week, Jubbaland President Ahmed Madobe flew to Nairobi over some undetermined agenda. Madobe, once the leader of the Ras Kamboni Brigade has been a common figure in Nairobi ever since his forces allied with the Kenya Defence Forces to defeat Al Shabaab in Kismayo in 2012.

After the victory in 2012, Madobe rose to become President of the nascent state, withering opposition from the then government of Sheikh Sharif Ahmed, and briefly later by Hassan Sheikh Mohamud. To Kenya, a peaceful Jubbaland could be a perfect buffer zone against Shabaab. That strategy didn’t work right, especially after the terror group started recruiting directly from foreign nationals. But it didn’t weaken the bond yet, as Nairobi sought to get back at Mogadishu over the border dispute.

In August this year, Madobe won an election which was immediately annulled by the federal government but endorsed by Nairobi. He survived, but that election also showed his other allies; Ethiopia had shifted to Mogadishu.

Whether Madobe was in Nairobi to seek re-assurances was not immediately explained with his spokesman promising to speak to journalists later. But it came as Ethiopian forces intensified their drill in Gedo region, allegedly taking over towns and forcing local officials to renounce allegiance to Madobe, according to his official complaint.

According to the opposition coalition, the Forum for National Parties (FNP), Ethiopia deployed a further contingent into Gedo, bypassing the African Union Mission in Somalia, to which it is a part and running operations under independent command.

“Ethiopia is in grave violations against the sovereignty and independence of Somalia’s territorial integrity,” the Coalition led by former President Ahmed said, alleging Mogadishu was profiting from the illegal entry by weakening the federal state.

Ethiopia hasn’t formally responded to the allegations. In an open letter to the UN Security Council last week, the Somali Democratic Council, a lobby in the US made the same allegation. Abdikarim Omar, a former diplomat and leader of the group alleged Ethiopians were deploying for chaos.

“It is high time, the UN Security Council took decisive action against the government of Ethiopia to withdraw immediately…since its forces have illegally been involved in violations of security council mandates,” he wrote, after Jubbaland Vice-President Mohamud Sayid Aden was blocked from touring Gedo, fleeing into Kenya for safety.

The group challenged the UN Security Council to take action and prevent the relapse into civil war. But Jubbaland, one of the several federal states in Somalia, could only know their fate after next year’s constitutional review.

Abdirahman Abdishakur, the leader of Wadajir Party argued Ethiopia was aiding Somalia to “centralise the country” by clamping down on federal state administrations, despite it being a federal system.

So, is Jubbaland a proxy tiff between Kenya and Somalia (through Ethiopia)? Kenya’s Ministry of Foreign Affairs refused to be drawn into the saga, arguing Kenya won’t interfere with Somalia’s internal affairs.

But some observers think so. Adan Khamis, a foreign policy expert in Nairobi, argued that the first signs were out during the controversial elections where Kenya issued an endorsement promptly even as Mogadishu called it a shambles.

“The bottom line is Ethiopia and Somalia are out to kick out Madobe. Ethiopia wants Kismayo and four other Somali ports, but it knows it can’t negotiate directly with Jubbaland,” he argued.

“Both Ethiopia and Kenya are in Amisom, with a mandate to keep the peace. So, technically you won’t see them fight or even fight against Somali National Army. That means Mogadishu can do whatever it wants in Jubbaland.”

Previously, Ethiopia would go directly to federal states. Which explains how it had reached an agreement with Somaliland for the port of Berbera. An Ethiopian diplomat did admit Premier Abiy Ahmed had changed policy to work with the federal government, but declined to discuss the role of additional, illegal, currently forces in Jubbaland.

As it is, the Provisional Constitution in Somalia doesn’t actually list the functions of each level or even differentiate whether certain functions can only be done by one level of government. This has led to certain government entities only dealing with some federal states, against Mogadishu’s wishes.

Asked to explain their response to Ethiopian troops, the Kenya Defence Forces said they will continue to work within the guidelines of Amisom. “Our troops in Sector II and VI in Kismayo have not engaged in any other operations apart from those stipulated in this mandate,” said Col Paul Njuguna, the Spokesman of KDF.

With Jubbaland though, there is a connection to Kenya. The biggest Somali clan in Jubbaland, Ogaden, is also the main one in Kenya’s North Eastern region, composed of Garissa, Wajir and Mandera. When Madobe was sworn in, Kenya sent the Majority Leader of the National Assembly Aden Duale; an ethnic Somali from the same clan as Madobe, to deliver President Kenyatta’s speech.

Gedo region, however, is the area of Jubbaland dominated by the Marehan, President Farmajo’s clan. Others are minority.

“It takes us back to the maritime boundary,” argued Edward Ayacko, an economist familiar with oil politics.

“Kenya could be buying some time to see how the case goes while it compromises with Somalia on other bilateral issues. It is not leaving its sight on Jubbaland though. Because the region still has a strong connection to Kenya and it cannot afford to burn the bridge yet.”

In Nairobi, Madobe’s itinerary wasn’t clear, but he met with local ethnic Somali politicians as well as those from Ethiopia, perhaps reflecting his continuous search for broad regional support. When he met the leader of the Ogaden National Liberation Front Abdirahman Mahdi, his handlers played it down as coincidence.