How Khaire's exit could shape Somalia's geopolitical and social-economic fortunes 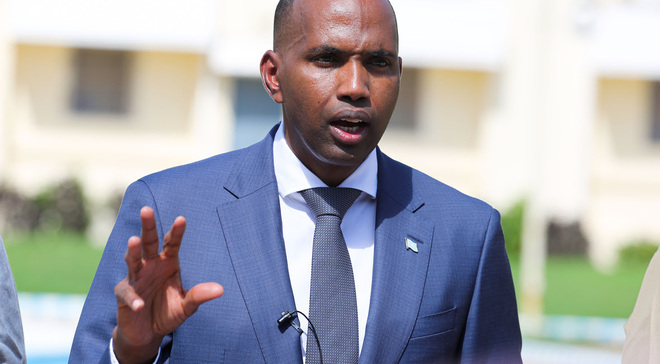 MOGADISHU, Somalia | Quite unprecedented it was but Hassan Ali Khaire is no longer the Prime Minister of the Federal Republic of Somalia, and without resistance, he admitted his fate and exited like a statesman, a striking contrast of typical African leaders, who prefer fighting to the last minute and to full exhaustion of all options.

Before Saturday's shock ouster, Khaire, who was the longest-serving Somalia PM, had not openly exhibited differences with his boss, President Mohamed Abdullahi Farmajo, but had spoken tough about "attempts" to delay elections later on this year. In fact, he had persuaded his boss to visit Dhusamareb for reconciliation with federal state leadership.

Terming his removal "illegal and unconstitutional", Khaire maintained that his decision to "quit" was informed by the fragility of the country's unpredictable situation, adding that he envisions a "stable" nation with less political wrangles. Despite his predicament, he thanked former colleagues in government for "superb" cooperation.

In a statement, President Mohamed Abdullahi Farmajo seemed to blame wrangles between the executive and parliament for Khaire's ouster, despite the fact that no such issues had been reported. On the order paper in the chaotic parliament, the ouster motion was not one of the day's businesses for transactions.

But for continuity, Farmajo, who expressed "sympathy" to his former friend, appointed Deputy Prime Minister Mahdi Mohamed Gulaid as acting Prime Minister, adding that "a substantive appointment will be made in a month". In a tweet, Gulaid accepted the appointment, saying that "I will execute the mandate with the utmost integrity".

Already, Khaire's ouster has irked the opposition, which believes that the removal would pave way for term extension for the current administration. The coup, they argued, would "derail" Dhusamareb talks where the FGS and FMS leaders are expecting to agree on contentious electoral clauses.

But the sternest warning came from the United States of America, which termed Khaire's removal "irregular and uncalled for". The no-confidence motion, the US added, was regrettable and should have not been admitted at all since it "has heightened political instability".

Although not many expected the removal of the PM, his recent utterances depicted a picture of a man who is strongly against term extension. This is contrary to his boss, who had already endorsed one-person-one-vote elections, which the electoral body said would be delivered earliest in March 2021, thus leading to a term extension.

But Abdimalik Abdullahi, a researcher, says Khaire's dethronement was in the offing since "he'd expressed interests" in the presidency. While terming Khaire's speech "bold and that of a statesman", Abdimalik added that President Mohamed Abdullahi Farmajo's allies have been crafting for his removal for almost a year now.

"The ouster of Khayre was in the offing. It was only a matter of when. Khayre played a good cop for almost one year now. His strategists and foot soldiers running a low profile campaign. Farmajo knew he was planning to vie for the next elections," he notes.

However, the decision to kick him out could have negative political implications in Somalia, given his role in the preparation for the next elections and the ongoing reform agenda. The PM has been instrumental in pushing for a "realistic" electoral model besides initiating various tremendous economic reforms.

Rashid Abdi, another analyst on the Horn of Africa, contends that the ouster was "worst" political maneuver, adding that Khaire's removal in the middle of an electoral crisis would earn him "little" and probably expose him to "toxic" opposition politics in Somalia. Khaire was the engine of the current administration.

"President Farmajo has just executed the worst political maneuver of his career. Ousting his PM in midst of an electoral crisis is either genius or foolhardy. He gains little, just galvanized opposition. He has no choice whatsoever of re-election. He can only govern by force," he says.

The ouster, he adds, could also affect the country's economic fortunes given Khaire's role in pushing for oil and gas trade in Somalia, a move which is projected to give the country millions of foreign exchange earnings. Before plunging into politics, the former PM was an executive in an oil firm.

Next month, Somalia is expected open bids for five oil blocks and already, several oil giants such as Shell and ExxonMobil have expressed interest. The ex-PM was instrumental in marketing the country's oil globally, a move which Rashid says could be significantly affected by his exit.

"PM Khaire was an indispensable key player in Somalia's oil and gas sector. A major auction of new fields was planned in August. Would appear that now may have to be canceled," adds Abdi, who blames the PM for his predicaments partly due to his "dictatorial" leadership style that saw him "alienate" many friends.

So, what next for Farmajo?

Shortly after Khaire's removal, Farmajo picked Mahdi Mohamed Gulaid as interim Prime Minister and Villa Somalia added that the president would pick the next PM within the next one month. The nominee will have to face parliament for vetting before a substantive appointment is done.

With elections just around the corner and an intensifying rift between the FGS and opposition, Farmajo has been thrown into limbo, where he will have to choose between making compromises for the sake of political stability or maintaining the status quo, which would further escalate the current political impasse.

And this, Rashid Abdi adds, will be manifested in possible decision to offer the post to the opposition and the probable clan where he will pick the PM from. Politics in the Horn of Africa nation are largely driven by clan hegemony, a transient approach that is adopted for stability.

But Abdi says should the opposition accept decapitation of Khaire as "concession" and agree to "cohabit" with Farmajo's administration, it's then likely.

However, he adds, "Next PM will almost certainly be an Abgal. It is Farmajo's way to placate the Mudulood - Mogadishu's biggest clan family". Should the PM come from this clan, he says, the political calculation would minimize the influence of opposition bigwigs and former Presidents Sharif Sheikh Ahmed and Hassan Sheikh Mohamud who come from the clan.

For Abdimalik Abdullahi, the next Prime Minister would probably be a "loyal and timid" person who will not "outshine" the president. Importantly, he predicts, the president could reach out to the opposition in pursuit of political stability and form a Government of National Unity which could lead to a term extension.

Adam Aw Hirsi, a former Jubaland minister, while sympathizing with Khaire, said his ouster would "decongest" political atmosphere in the country which has been fluid in recent months. Both Farmajo and Khaire have been accused of stifling democracy by using the police force to silence critics.

The next PM, he adds, should be picked from the opposition for the sake of the country's stability. "President Farmaajo should reach out to the national opposition and appoint a PM who can hit the ground running," Hirsi said in a tweet