How Turkey is responsible for Somalia's instability 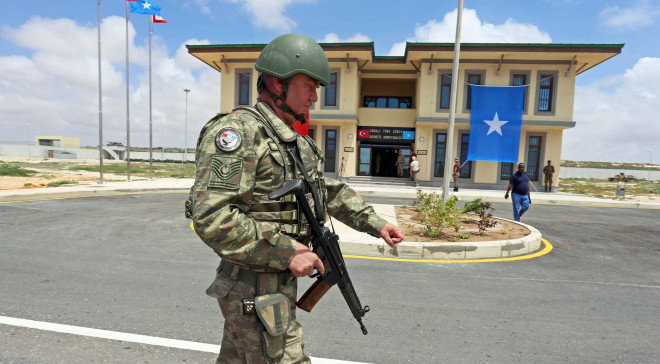 MOGADISHU, Somalia - The republic of Turkey has been dragged into Somalia's internal politics, with opposition leader Abdirahman Abdishakur Warsame now claiming Ankara is directly responsible for problems bedeviling the Horn of Africa nation.

Turkey is a major development, financial, and security partner of Somalia, a relationship that has lasted for almost a decade, even as the country struggles to fight violent extremism among other challenges. Some of the projects Turkey is taking part in include the improvement of roads and hospitals in Somalia.

But it's the training of Haramcad police and the GorGor troops that has often caused rifts in the country, with the opposition accusing President Mohamed Abdullahi Farmajo of "misusing" the soldiers for political expediency. They are accused of targeting opposition leaders in the crackdown.

In Mogadishu, Turkey has one of the largest overseas military training schools, which targets recruitment and training of Gor Gor special forces. But Abdishakur believes Turkey uses the opportunity to train and provide weapons that are wrongly used.

Turkey must help Somalia responsibly. It is not acceptable to train and provide weapons to soldiers who contribute to the insecurity and repression of the opposition," he told Garowe Online during Twitter Space conversation, Saturday dubbed "Democratization and state-building".

Ankara has massively invested in Somalia in a move that has seen equal competition from Qatar and United Arab Emirates [UAE]. Even in recent weeks, the Turkish convoys have often been targeted by Al-Shabaab, which seeks to overthrow the fragile UN-backed Somalia administration.

While acknowledging Somalia's problems are enormous, Abdirahman Abdishakur however, blamed outgoing President Mohamed Abdullahi Farmajo for focusing on "non-issues" with an aim of protecting his stay in power albeit in short term.

"In any case, no president can solve Somalia's problems in four years, but he can work to make it better," he said, adding that: "Farmaajo wasted time in crushing his critics and the Federal States in Somalia, and that's is what kept him busy from the war on Al-Shabaab."

For a long time, Farmajo has been accused of using security forces for his personal benefits. Ironically, in most of his speeches, the president has often asked security forces to adhere to their constitutional obligations in protecting the nation and its interests.

Turkish-trained Gor Gor commandos and Haramcad police are often dragged to the country's internal politics like the operation in Gedo and raiding of opposition leaders' residences in Mogadishu. Recently, a fallout in the army almost plunged the country into civil war after Farmajo's attempts to extend his term.

But Abdishakur suggests that "The power to appoint and replace heads of the security agencies in Somalia should not reside with the president." Across the world, security is a national government function.

"The goodness and strangeness of the army forces are not measured by the weapons and uniforms they carry, but by their independence from politics. The outgoing leaders used the SNA - Somali National Army for political purposes in Somalia," he added.

The opposition leader also took time to poke holes in the current administration whose mandate expired in February, arguing that it has fallen short of expectations, including but not limited to developing the Horn of Africa nation.

"The government is bigger than the person in power, it took us four years to make people understand that, we have to start the correction from scratch," said the opposition leader, who is among the leading presidential candidates..

"We may disagree on domestic politics, but we must be united in foreign policy and war against an enemy," he added, in reference to Farmajo's controversial foreign policy, which has seen Somalia often fallout with Kenya among other countries.

The opposition leader argued that "we must enforce accountability in Somalia and we must hold accountable those who have been or are in power" as he questioned the government's commitment to delivering some of the promises given over four years ago.

"The people of Somalia should not pay taxes to the outdated government in power illegally," he said. "Agreeing on security policy on the basis for building an effective army otherwise there will be no solution to the long-running order."

Mr. Abdishakur has been leading an onslaught against outgoing President Mohamed Abdullahi Farmajo, who he accuses of practicing dictatorship in most of his undertaking. He is also a member of the Union of Presidential Candidates in Somalia.