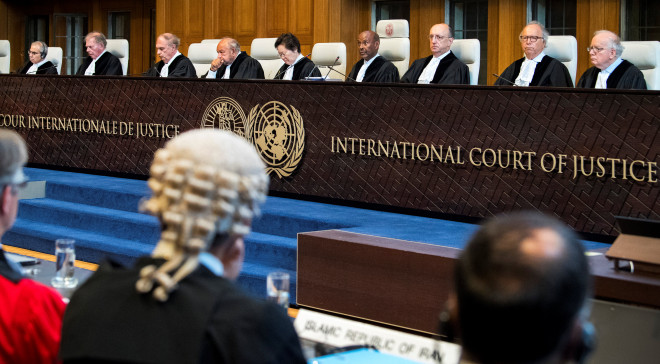 MOGADISHU, Somalia - The date for the much anticipated maritime border row verdict involving Kenya and Somalia has been issued, in what could change the relationship between the two neighboring nations, whose cooperation has been questioned in recent weeks.

According to Somalia's Deputy Prime Minister Mahdi Gulaid, the International Court of Justice [ICJ] has scheduled October 12th for the verdict. The ICJ will give judgment for the case which has for several years, affected the relationship between Nairobi and Mogadishu.

"I am pleased to announce that the ICJ will render a judgment of the case b/n Somalia v. Kenya on Tuesday 12 October 2021 The Peace Palace," Gulaid who has been among the people closely following the case, announced on his official Twitter account.

The adjudication affects more than 100,000 sq KM of the sea in the Indian Ocean, and the disputed area is said to be rich in hydrocarbons, something that makes the two countries fight over the affected area.

The former Somali government led by Hassan Sheikh Mohamud was the first to raise the case against Kenya, leading to bitter battles in court for the past seven years. The case was first put forth in 2014 and has since dragged on due to several prevailing issues.

Last year, the case was postponed thrice after Kenya raised a number of issues, including changing of its counsels. However, the ICJ would go on to hear the case on March 15, before retreating to the writing of judgment which will be now issued next month.

Nairobi has been pushing for an out-of-court settlement but Mogadishu has insisted on court processes. At the UN meeting in New York last year and the most recent African Union meeting in Addis Ababa, President Uhuru Kenyatta openly called for out of court settlement.

During his trip to Kenya in 2019, Somali President Mohamed Abdullahi Farmaajo also insisted that "we trust the courts, they are the best arbiters". It's during this time he openly rejected AU's offer, arguing that both parties should respect the court outcome.

But the statement would be amended quickly when Roble protested. In a statement, Roble insisted that "we never discussed such an issue. That was misreporting. I trust in the normal court processes".

Somalia is struggling to start exportation of oil and should the case go her way, the Horn of Africa nation could have a tremendous boost of her economy. Already, it has leased a number of oil wells to companies.

For Kenya, it will be a major setback that could potentially ruin the relationship between the two countries. It's just in July the two nations normalized diplomatic ties after weeks of wrangles.