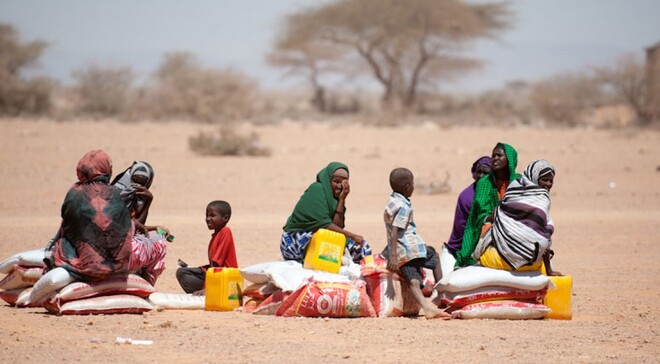 MOGADISHU, Somalia -- The International Committee of the Red Cross (ICRC) on Tuesday expressed fears that COVID-19 will spread, undetected, among the crowded camps for the displaced in Somalia.

"We are concerned that many COVID cases are going undetected, especially in the internally displaced camps," Guzman said in a statement issued in Mogadishu.

"Because of the ongoing conflict in Somalia, and also we are facing floods right now in Somalia, there is an increase in the number of internally displaced populations into urban areas and this creates the perfect environment for infectious disease."

According to the ICRC, Somalia's healthcare system has been gutted by decades of violence, and underinvestment with only about 50 percent of people in urban areas is estimated to have access to medical care.

The ICRC, working with the Somali Red Crescent Society, said it has begun disinfecting the camps as well as testing and contact tracing.

Cases have been rising in Somalia's capital Mogadishu, a city already disrupted by years of conflict, and struggling to support thousands of internally displaced people.

The Horn of African nation has so far confirmed 2,658 cases, 449 recoveries, and 88 deaths as of Tuesday amid concern if the virus transmission is not contained rapidly, the patient surge and increasing demand for health care will overwhelm the country's fragile health system.

The cases are surging at a time that Somalia is struggling to contain floods that have affected nearly a million people and desert locusts that are devouring crops and pasture in the country's Somaliland, Puntland, and Galmudug, creating a triple threat.

ICRC said it is working together with the Somali Red Crescent as well as local communities to prevent its spread, going door to door with advice on how to stay safe, tracing contacts, and supporting local health workers.

"People have poured into the camps. Some have houses, but others are sleeping in the open. They need support. The rains are falling, and they don't have anywhere to go. No blankets to keep warm. They don't have food to eat," said the 43-year-old Habiba Haji who lives in one of the camps for the displaced.

The Horn of Africa nation has instituted measures to contain the possible spread of COVID-19, including closing schools, banning large gatherings, and suspending international and domestic passenger flights.