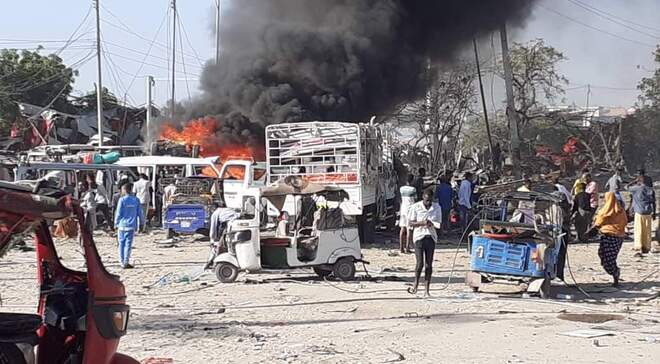 MOGADISHU, Somalia - An Improvised Explosive Device [IED] left at least seven civilians dead on Monday, authorities in Somalia said, in the latest wave of violence targeting innocent people in the Horn of Africa nation, which has never had a stable government in the last three decades.

Police in Somalia said an IED exploded in the Bakool region killing the seven innocent civilians, in one of the latest deadly attacks targeting those who should be protected from violence. The explosion took place in the afternoon hours according to officials.

Officers from Hudur said the victims were traveling on Tuk-Tuk when the incident took place and they are believed to have attended a religious function in the outskirts of the town. The Tuk-Tuk was completely dismembered, the officers said in a statement.

At least three people were seriously wounded following the explosion and have since been taken to a nearby hospital for treatment. Police officers seized the scene and have since secured the place, with reports indicating that the Special Forces unit is pursuing the culprits.

No group has since taken responsibility for the deadly attack but the Al-Shabaab militants, who have been causing havoc in the country, are known to be waging attacks of such nature. Such attacks, experts argue, usually target security forces who drive along when beefing up security in the town.

The Somali National Army [SNA] recently captured the Huddur town after many years under the control of the Al-Shabaab. The town is one of the latest strategic areas to be liberated, and it's believed that the militants were executing retaliatory attacks against security forces.

Southwest is one of the most affected states by the occupation of Al-Shabaab militants but security forces are keen to liberate all territories. Bay and Bakool regions are considered as strongholds for the militants, who swore allegiance to the Al-Qaeda group in 2012.

Elsewhere, two government soldiers were convicted by a military court in the Gedo region overshooting that happened in Balad-Hawo town on September 7, 2020, which left one police officer dead and one other critically injured, officials said.

Gedo region has been witnessing intrigues between allied security forces in the last couple of months. For instance, the Somali National Army and the Jubaland forces have been fighting in the last seven months, but the situation was contained following efforts by Jubaland President Ahmed Madobe and President Mohamed Abdullahi Farmajo.

Al-Shabaab has continued to control large swathes of rural southern and central Somalia but the government response through SNA, AMISOM, and the US Africa Command seems to be yielding fruits. The forces have managed to kill several Al-Shabaab militants besides liberating key towns.