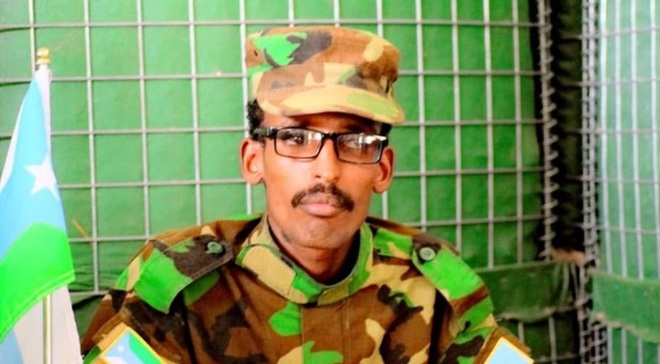 MOGADISHU, Somalia - A top Jubaland force commander rejected a whopping $1 million to facilitate a coup against Ahmed Madobe, details have emerged, in a shocking confession that could further escalate the dwindling relationship between Mogadishu and Kismayo authorities.

Major Mahad Mohamed Islam, who is the commander of Jubaland's Darwish forces in Afmadow town, made the unprecedented allegations on his Facebook, directly implicating President Mohamed Abdullahi Farmajo and spy chief Fahad Yasin.

Under the complex agreement, Mr. Mohamed was tasked to facilitate takeovers by Somali National Army [SNA] in Afmadow and Dhobley in Lower Juba, through systematic coordination from Mogadishu, he claimed, tabling compelling evidence.

It all started with a phone call from Yasin, a former Al-Jazeera journalist tasked to lead the spy agency, NISA. After the talk, Yasin pledged to reciprocate by wiring $1 million, upon the capture of the two strategic towns in Jubaland, the commander said.

A determined Yasin reportedly made the "all-important" phone call on March 6. in which he asked the commander to join SNA for the historic raid. Mohamed is a key ally of Madobe, who is increasingly under threat from Mogadishu for his "radical" approach to national integration.

"You will get everything you need from FGS, including $1 million and promotion of your army rank. This is a promise I make for you and you will speak to the president," Yasin is quoted assuring Mr. Mohamed.

Farmajo's factor in the purported deal

And to make the deal really, the powerful commander was introduced to President Farmajo via a phone call. For months, Farmajo has been accused of "secret plot" to overthrow "defiant" regional leaders ahead of December polls.

In the alleged phone call, an enthusiastic Farmajo agreed to fulfill a host of pledges made to the commander, as a sign of gratitude for his "patriotism". It's not clear how long the phone conversation took.

But according to contacts availed by Mohamed, his contact with Farmajo was facilitated by Yusuf Adani, a senior official in the office of the president. Fahad Yasin was the overall coordinator, he claimed.

Among others, the president is also said to have pledged asylum for the commander's family in Turkey, which would be followed by hefty monetary rewards for their own safety.

Dhobley and Afmadow fall within Sector II of AMISOM troops in Somalia. A special contingent of Kenya Defense Forces [KDF] mans both towns with help from local Darwish troops.

Owing to the fact that the two towns were liberated from the Al-Shabaab, they are strategic for administration purposes, perhaps explaining FGS pursuit for their take over.

Inside the conspiracy to raid Jubaland

And after a phone call from Farmajo, a stage was set to execute the plan intelligently, in what could have prematurely ended Madobe's reign in Jubaland.

The first to fall under the complex plan was Afmadow, whose local airstrip was to be seized by Special Forces from SNA. Thereafter, the contingent was set to move to Dhobley, he said.

"Fahad had set March 11 for Afmadow take over. To make it easier, the telecommunication network was to be switched off to allow SNA to seize the town," Mohamed said.

To facilitate Mr. Mohamed, Fahad Yasin sent $3,000 on March 9. for the purchase of a satellite phone prepaid card which usually works better in case of communication shut down.

On March 10. $80,000 was also wired to the Darwish commander, ostensibly for logistics ahead of the takeover. Had the deal gone through, it would have been the worst raid by FGS on regional administration, and properly protract simmering tensions between the two entities.

But contrary to the plans, the commander aborted the lethal mission. Instead, he transferred a whopping $110,000 down payment to Jubaland finance ministry before going on air about the alleged coup to dethrone Madobe.

In his statement, he claims that Mr. Fahad Yasin threatened him of "dire consequences" should he fail to execute the plan. Among the repercussions, included making him a "fugitive" like Jubaland minister Abdirashid Janan, who they insist "failed to help us" in getting rid of Madobe.

All the numbers of the officials implicated in the scandal were published by the commander on his Facebook page. Until going to press, both Mr. Yasin and Villa Somalia had not given a rebuttal to the suicidal claims.

Since taking over in 2017, Farmajo's working relationship with federal states has hit the bottom low, with frequent differences on matters of national interest taking center stage.

Particularly, Mr. Madobe and Said Deni of Puntland have been leading the onslaught against the federal government. Among others, the regions have disputed both electoral and petroleum laws, which have since been assented to.

Last week, Madobe sensationally claimed that the federal government had offered him $20 million to step down, an offer which he flatly rejected. He didn't give tangible proof to back his claims.

He accused Mogadishu of "behaving like Al-Shabaab" by coercing people to support the government and called for "urgent dialogue" to solve the impasse which had rocked the war-torn nation.

While FGS is expected to lead the onslaught against the Al-Shabaab, it has instead diverted resources in battling regional forces, who play a significant role in the war against the militants.

For instance, Turkish-trained SNA troops seized Galmadug from moderate Sufi Muslim group ASWJ a fortnight ago. The troops have also clashed with Jubaland forces at Balad-Hawo, in the Gedo region.

So intense has been the rift that international partners have called for the withdrawal of SNA troops from Gedo, arguing that "it gives room for Al-Shabaab resurgence". Kenya has also been dragged to the skirmishes.

A tripartite summit was called for next week by President Uhuru Kenyatta which would involve Farmajo and Dr. Abiy Ahmed. However, the March 16 meeting has been called off due to coronavirus scare in Nairobi, Kenyan officials said.