Jubaland president calls for dialogue on election crisis in Somalia 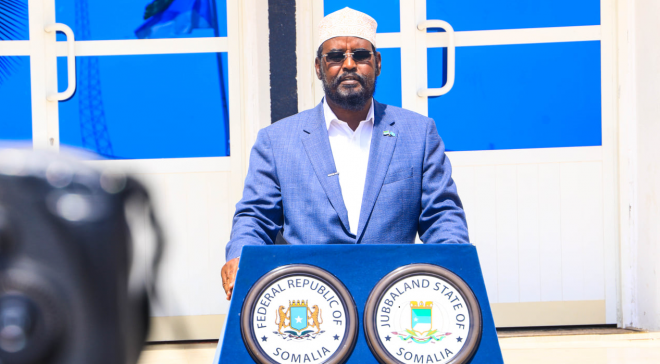 KISMAYO, Somalia - Somalia should not tolerate partial elections as planned by the federal government, Jubaland President Ahmed Islam Mohamed Madobe has fired back at Villa Somalia, just a few days after PM Roble announced plans to go on with elections as planned.

In his statement, Roble, who took over recently as the coordinator of government functions, ruled out dialogue after months of shuttle diplomatic meetings with a number of state leaders, adding that elections would commence in the coming few days for the sake of meeting the deadline.

But upon arrival at Kismayo from Garowe, the capital of Puntland on Sunday, Madobe insisted that opposition leaders and the leadership of Jubaland and Puntland were keen to have dialogue that was to be brokered by Galmadug President Ahmed Abdi Kariye alias Qor-Qor.

As they have been awaiting a response from Villa Somalia, surprising news came out from PM Roble on Saturday announcing elections will take place in Galmudug, HirShabelle, Southwest, and Mogadishu, despite the existence of many unresolved issues surrounding the electoral process.

Madobe warned one-sided elections in Somalia that would result in chaos and jeopardize the hard-gained progress in the past, including security and state-building efforts.

"If Somalia could handle dictatorship, it would not have collapsed," said Madobe, calling Farmajo to show wisdom and leadership by putting the country's interests before his personal gain, which he warned that could plunge the country into chaos.

Speaking on the issue of Gedo, President Madobe said that they even suggested that the issue of the removal of the federal forces from the region be postponed to implement the election agreement signed on September 17th, 2020 but Villa Somalia rejected to negotiate and allow Jubaland manage the election of the MPs in Garbaharey.

Initially, Madobe had insisted that elections would not take place in the state until SNA troops withdrew from the Gedo region, which has been under federal authorities contrary to the law. His sentiments were backed by opposition leaders and the Puntland President Said Abdullahi Deni.

Madobe urged Villa Somalia to convene a national dialogue on resolving the current pre-election crisis. According to him, lack of dialogue would plunge the country into another crisis that could take several years to be solved.

The opposition leaders had also accused Federal Government of installing NISA agents, civil servants, and loyalists of President Farmajo in the electoral committee. The committee, they insisted, ought to be disbanded to allow fresh recruitment of members.