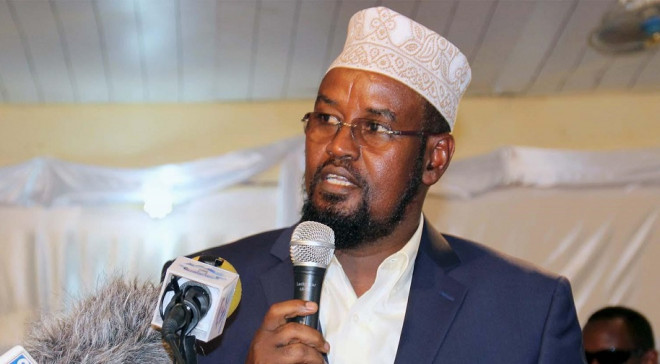 MOGADISHU, Somalia - One of five of Somalia’s regional governments said on Sunday it had rejected the inclusion of national President Mohamed Abdullahi Mohamed in talks aimed at resolving a deadlock on a delayed election, exacerbating a crisis on the vote.

Leaders in the two federal states, Puntland and Jubaland, had already said earlier this month they would no longer recognize President Mohamed, whose term expired on Feb.8.

“The expired president Farmajo should be out of the election process. He should not have a role in the process of election in order for all political stakeholders to have confidence in it,” Jubbaland’s statehouse said in a statement, referring to Mohamed by his nickname.

Calls and emails to the government spokesman Mohamed Ibrahim for comment were not answered.

State-run Somalia News Agency reported on Sunday that Mohamed was meeting with the prime minister, the presidents of Hirshabele, Galmudug and southwest states, U.N. representatives, and the mayor of the capital Mogadishu at his Villa Somalia office.

In early February, an alliance of Somali opposition parties said they would reject any attempt to extend Mohamed’s term.

The alliance called for the creation of a national council of lawmakers, opposition leaders, and civil society to govern the Horn of Africa nation after the president’s term expired with no clear succession plan.

On Friday, government troops and opposition supporters - including some soldiers - exchanged gunfire in Mogadishu in street clashes that broke out during a protest march over the delayed elections.

A union of opposition presidential candidates said on Saturday they will continue with their marches until all-inclusive talks on the vote are held.

The violence raised concern that the military could split along clan lines and bolster an al Qaeda-linked insurgency, especially as hundreds of U.S. troops have recently pulled out of Somalia.

Somalia was earlier planning to hold its first direct election since civil war erupted in 1991, but delays in preparations and continuous attacks by al Shabaab Islamist insurgents forced it to plan another indirect vote.

While the constitution gives four-year mandates for the presidency, an extension of the government’s term by parliament is legally allowed by precedent, though analysts warn that the move is politically fraught.