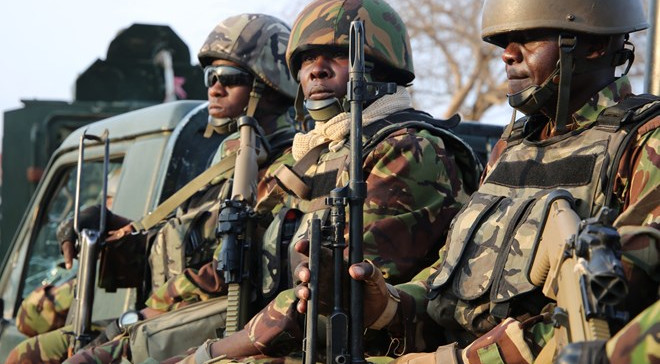 MOGADISHU, Somalia - At least 11 Al-Shabaab militants were killed by the Kenya Defense Forces [KDF] in Kudha, Jubaland, a senior military official said, in the latest crack-down targeting the group, who otherwise control large swathes of rural central and southern Somalia.

The Wednesday's operation by the KDF was the latest in Somalia to be conducted and comes at the time AMISOM troops are working hard to implement the Somali Transition Plan [STP] before they officially leave Somalia.

David Goldman, the Director of Counterterrorism, National Security, and Intelligence Analysis at Strategic Intelligence, confirmed the Wednesday mid-morning incident, adding that two vehicles belonging to the al-Qaeda branch in Somalia were destroyed during the aerial and ground operation.

According to him, the militants were targeting the Jubaland Security Forces [JSF] who work closely with the KDF, while they were returning to their base after patrol. The militants managed to kill seven JSF troops, while three sustained injuries, in the early morning attack.

“Kenya Defense Forces [KDF] at Kuday FOB reinforced the JSF by deploying a gunship helicopter and a ground fighting patrol unit. The army intercepted the militants and their vehicles along the Kuday-Tosha Road and destroyed the vehicles and their occupants," he said.

"At the same time, Special Operators took out nine militants who had disengaged from the vehicles,” Mr. Goldman added, noting that at least 10 JSF officers were critically injured and are currently receiving treatment at a KDF base.

According to the weekly Counter-Terrorism Intelligence Brief for East Africa, the first ten days of July witnessed a surge in militants’ attacks directed on hard targets. They attempted assassinations and ambush raids on government officials.

In the same period under review, al-Shabaab notably carried out a suicide mission and IED raids both on security forces and on civilian targets. The capital Mogadishu was largely targeted by the militants.

In the period under review, at least 17 attacks were recorded, all from across the regions of Somalia. al-Shabaab has notably targeted AMISOM troops in Gedo, Lower Shabelle, Lower Juba, and Bay and Bakool regions in a number of these attacks. Most of the raids against the targets are notably ambushes and setting up of roadside IEDs.

Elsewhere, reports indicate that two minibusses loaded with Al-Shabaab militants attacked locals in the vicinity of Jidow in Warsheikh town in the early hours of Wednesday morning, leading to a fierce gunfight according to eyewitnesses.

The militants reportedly attempted to force locals to accept paying zakat. Locals reportedly repelled the militants back. The Al-Shabaab group usually targets security forces, senior government officials, and at times, innocent civilians within Somalia and across the border.