Kenya cautions US against withdrawal of army from Somalia 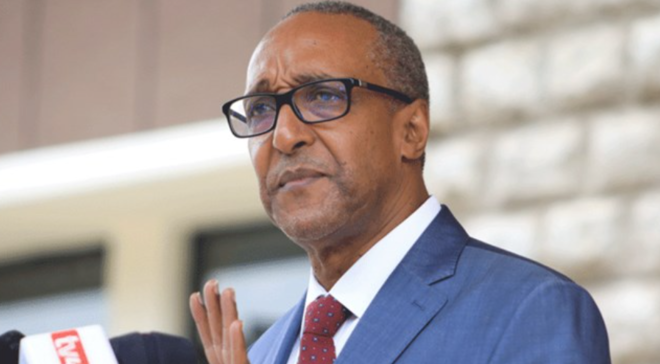 Currently, the US has close to 600 servicemen in Somalia and most of them were deployed after Trump took over from Barack Obama in 2017. This is the highest number in a single country within Africa, drawn from a total of 7,000 servicemen deployed to the entire continent for peacekeeping and degrading insurgents.

The US servicemen are mostly engaged in training of the Somali National Army [SNA] and giving aerial surveillance during sophisticated operations across the country. Like this year alone, they have bombarded Al-Shabaab strongholds 46 times and managed to kill over 60 Al-Shabaab militants.

And Kamau, who once served as Kenya's ambassador to the United Nations, told reporters that withdrawal of the US from Somalia will only give room for the resurgence of Al-Shabaab, who seems to be losing grip in rural central and southern Somalia, where they have controlled for years.

"The exit will worsen the already fragile situation in the country. The troops should stay there for a little longer and help the country crush the militants from their strongholds," he said, adding that: "Those in charge should advise against such a mistake, it shouldn't happen at all."

His remarks come a fortnight after Kenya's President Uhuru Kenyatta insisted that the withdrawal of the Kenya Defense Forces [KDF] will depend on the security situation in Somalia. On paper, the KDF team serving in AMISOM is supposed to leave by December 2021 upon full implementation of the Somali Transition Plan [STP].

Last week, Somalia's President Mohamed Abdullahi Farmajo also cautioned against the withdrawal of the US servicemen, arguing that the troops have enabled the county to crush the militants in several strategic parts of the country.

"The United States military support to Somalia has enabled us to effectively combat Al-Shabab and secure the Horn of Africa. A victory through this journey and for Somali-US partnership can only be achieved through continuous security partnership and capacity building support," he said.

Early this year, General Stephen Townsend, the commander of the US Africa Command, hinted that the US troops are to leave Somalia in 2027. The commander has initiated a number of programs including the Civilian Casualty Quarterly Reports which he started issuing in April.

But Brian Higgs, a researcher, says the US should withdraw her troops from Somalia with immediate effect. Somalia, he adds, should solve her internal issues themselves without involving foreigners, adding that this will strengthen democracy and perhaps give room for stability.

"Mr. President, Foreign troops are in Somalia for their own selfish interests. No one is genuinely interested in combating Al-Shabaab. Somali problems must be solved by Somalis themselves. Face the facts," he noted.

Last year, Kamau also slammed the UN for allegedly giving Al-Shabaab aid as a "bribe" to allow them to reach certain regions. But the claims were disputed by the United Nations, which is one of the key stakeholders in Somalia's quest for peace and stability.