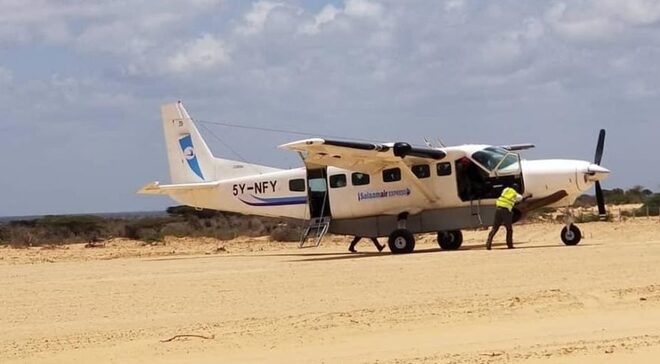 MOGADISHU, Somalia - A Kenyan plane has reportedly delivered tonnes of Khat in southern Somalia, despite the fact that the Horn of Africa nation has banned the importation of the stimulant, following the outbreak of Coronavirus, which has continued to wreak havoc in the country.

According to reports, the plane landed in the recently renovated Barawe airport within Southwest state with several boxes of Khat on Friday, in an incident which could likely spark a debate on the safety of Somalia skies amid the ongoing efforts to combat the pandemic.

Multiple sources confirmed that the stimulant was smuggled from neighboring Kenya on land via Dhobley, which is manned by Kenya Defense Forces [KDF] troops from Sector II of AMISOM jurisdiction.

And after delivery at Dhobley, reports indicate, a plane that flew from Somalia capital, Mogadishu, picked the stimulant and delivered it in Barawe, where standby boats shipped it to intended destinations, with sources saying that the smugglers may have taken it to Mogadishu.

The incident comes amid stringent protocols imposed by the Somalia government due to the COVID-19 pandemic. Currently, only cargo planes are allowed to fly on Somalia skies specifically those that carrying medical aid among other emergency services.

Plans to open the skies for domestic flights were canceled last week after cases of Coronavirus continued to ravage the country. There are close to 3,000 infections in Somalia so far, something which informed the delay to allow passenger and commercial flights into the country.

But insiders say operators are using different tactics to beat the strict protocols that were imposed following the outbreak of COVID-19. In this case, VOA reporter Harun Maruf said, the plane disguised itself as humanitarian aid aircraft but changed the route to pick the already smuggled Khat.

The incident has triggered mixed reactions from among the residents, with some accusing government bureaucrats of working in cohorts with the smugglers to violate regulations that are set for the benefit of Somali people.

"If the plane flew from Mogadishu to Dhobley it means it had permission from FGS. They might have taken humanitarian aid to Dhobley and illegally transported Khat on its way back to Mogadishu by transitioning in Barawe and unloading Khat there. Barawe airport authority allowed this," argued Mohamed Ali, a Mogadishu resident.

"We tried that and look at the outcome, 30 years of stateless. Also, this has nothing to do with respecting laws, the war of drugs was declared by the US five decades ago, has that worked - or is the US also people who cannot follow ‘laws’. The issue is much more complicated," added Hassan Adan.

Kenya is the biggest exporter of Khat, which is treated as a commercial crop within the East Africa nation. It's a major foreign exchange earner and Somalia provides the biggest readily available market for the traders.

The latest incident also comes barely a month after authorities in Somalia revoked licenses to two companies for violating COVID-19 restrictions in Somalia. Officials linked the aircraft to illegal ferrying of the stimulant.

According to multiple sources within FGS, the Transport and Aviation Minister Mohamed Abdullahi Omar revoked the licenses for Buff Air Services and Silverstone's Airlines for violating the rules, but the communication is yet to be made public.

The two airlines, insiders say, have been smuggling Khat worth millions of dollars in the pretext of "medical supplies", a move which angered authorities when the tricks were unearthed. The airlines, sources added, have also been violating COVID-19 rules.

But in recent months, there has been a spirited campaign from certain NGOs geared at permanently banning the use of Khat in Somalia. The drug, which is majorly exported from Kenya, has been attributed to poor output in Somalia's economy given that addicts "spend most time chewing it".

Insiders told Garowe Online that the two companies have been delivering the crop at Buhodle and Jowhar airstrips, avoiding the busy Aden Adde International Airport, where protocols are strictly adhered to. One of the aircraft was pictured offloading Khat at Buhodle on May 26 while another one at Jowhar five days later, reports indicate.

Somalia is a major market for Khat from Kenya, which fetches farmers mainly from Mt. Kenya East millions of dollars. Nairobi has heavily invested in the crop, which closes to $10 million allocated this coming financial year [2020/21] solely for the resuscitation of the Khat business.

Although details of the plane that delivered the crop to Barawe are yet to be established, it also risks revocation of license. Most of the aircraft operating on Somalia skies are leased to Non-Governmental Organizations [NGOs] which are used for delivery of humanitarian aid in the country.

Still battling with inter-clan conflicts and Al-Shabaab menace, Somalia's road networks are fairly poor, making air transport to be the most popular among average citizens and foreigners. But the airspace is now considered unsafe following the downing of a Kenyan humanitarian aircraft last month in Bardale.