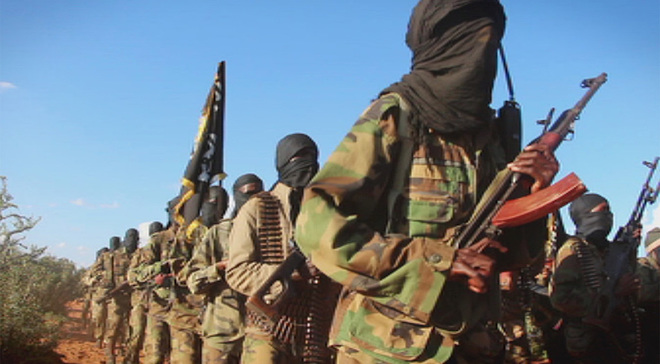 Somali government forces and African Union peacekeepers have vacated the key town ahead of militant onslaught, with Al Shabaab fighters confronted with a little resistance by vigilantes some distance east of Merca.

Witnesses and residents have confirmed that militants hoisted their flag in downtown Merca in a rare show of military strength in the volatile south.

Merca is so quiet and residents stay indoors due to mounting fear over resurgence of militancy.

Fighters from the Somali militant group were spotted at a police compound in Lower Shabelle regional capital of Merca.

AMISOM forces have retreated from El Jalle base to Shalanbod, 15km off Merca by Thursday evening. Lower Shabelle regional officials have also been evacuated.

Merca, 109km southwest of Mogadishu was liberated from Al Shabaab in 2012.

Merca falls to what has been a beleaguered group, and similar surprise pullouts sparked off doubts on whether a series of withdrawals could be seen as tacit.

Political commentator, Abdihakin Aynte’ called the capture of Merca a “setback” and “propaganda victory” following gains over the last few years in central and southern Somalia.

Addressing the African Union Peace and Security Council on the eve of 26th AU summit in Ethiopian capital, Addis Ababa, Kenyatta maintained that peacekeepers were facing hardened fighters in the wake of deadly assault on Kenyan-AMISOM base in southwestern El Adde village.