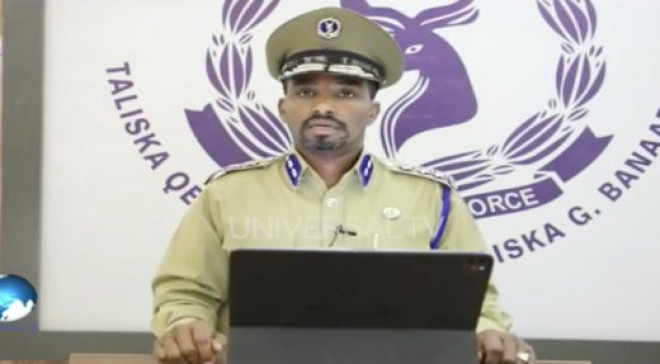 MOGADISHU, Somalia - The political crisis in Somalia could degenerate into a serious security threat following the latest involvement of the police in the fierce fight for control of power, and now leading to the unceremonious dismissal of Mogadishu police commander Sadak John.

In a dispatch by the state media, Gen. Abdi Hassan Hijar, the country's police commander, sacked Sadak moments after the latter "suspended" parliamentary session scheduled for Monday, which is set to address the "national elections" crisis.

General Hijaar has since replaced Sadik as Banadir police boss with Major Farhan Mohamed Aden alias Farhan Qarole, in what could now create rifts within the critical security sector, which has been marred with allegations of bias, inconsistencies, and general disregard of the law.

In a press conference, the former Banadir police boss said he'd suspended the Lower House session and asked all MPs to "seek a fresh mandate from the people". He warned that "term extension is unwelcome" during his interview with Universal TV.

Sadak, who has been in charge of security in the capital Mogadishu, asked Prime Minister Mohamed Hussein Roble to take over responsibility for the country and send disputing sides “back to the tent” to reach a consensus on elections. “You should not sit around and take dictation, you should be dictating,” he said.

MPs are set to meet incoming minutes to discuss "national elections" but many observers and opposition politicians insist the session could be used to extend the current administration of Mohamed Abdullahi Farmajo's term, a move which has elicited sharp reactions.

Farmajo's term expired on Feb 8 and the country's political leadership has been embroiled in a bitter political contest over the composition of the Electoral Committee among other agendas which are yet to be concluded in several talks that have been held before.

It's not clear if Sadik had the blessings from Prime Minister Mohamed Hussein Roble to issue such a statement. Roble was brought on board in September 2020 after former Prime Minister Hassan Ali Khaire fell out with President Mohamed Abdullahi Farmajo over elections.

Sources say MPs could push for universal suffrage polls and thus extend the term for two more years to allow the government to prepare for the direct elections. In September, the leadership had agreed to conduct an improved clan-based model of elections, which would have seen delegates pick legislators, who would later vote for president.

Abdirizak Mohamed, a federal MP, had on Monday dismissed the planned Lower House session as a "mutilation" of the House procedures, adding that "this is a clever way of extending Farmajo's term". He reiterated sentiments by former President Sharif Sheikh Ahmed, who so warned against term extension.

Last week, talks to unravel the political stalemate in the country collapsed after the federal government bolted out, arguing that "despite doing our best, Jubaland and Puntland remain a stumbling block to the progress we've made. They are opposing even what we'd agree". The government insisted that it would implement September 17 pre-election deal.

But Jubaland and Puntland accused the federal government of "blatant lies", arguing that the Mogadishu administration was hell-bent to "hide the truth for selfish gains". Besides the withdrawal of federal troops from Gedo, the two states insisted that the Feb 19 shooting in Mogadishu and the legitimacy of the current administration should be part of agendas for discussion.

The International Community has been pushing for reconciliation from both parties, insisting that "saboteurs" of the talks would face stern penalties. The United States which is key in pushing for dialogue even warned of possible sanctions on those dragging the process.

Somalia has struggled to form stable governments since the ouster of military ruler Siad Barre in 1991, even leading to the fallout with Somaliland. Equally thorny, and which has increased fears among the international partners, is the possibility of Al-Shabaab resurgence at a time when politicians are struggling to agree on a model and procure for elections.