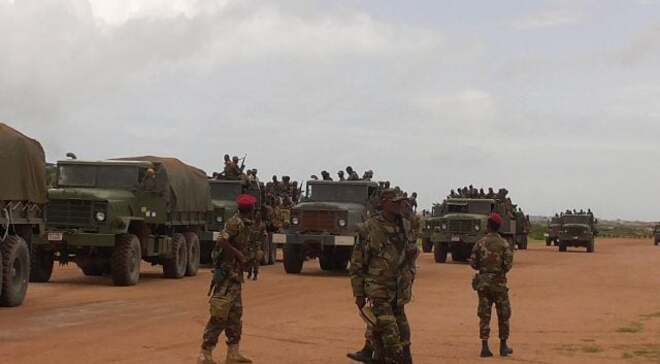 MOGADISHU, Somalia - A contingent of the Somali National Army [SNA] was over the weekend deployed to the porous Gedo region in Jubaland, reports have emerged, following complaints about alleged brutality meted on locals by the Kenya Defense Forces, who are operating in Sector II of African Union Mission Forces.

The KDF team is stationed within the region which also has a heavy presence of the Ethiopian National Defense Forces [ENDF] who closely work with the SNA. The Kenyan troops work with the Jubaland security forces, something which has often triggered clashes in the region.

A fortnight ago, residents from the town of Balad-Hawo within Gedo and those from El-Wak held peaceful demonstrations, accusing the KDF team of the killing of a civilian and abducting three locals under unclear circumstances. Protestors called for intervention from the Somalia government.

While it's not clear what transpired, it is believed that the men who were whisked away by KDF had links with the Al-Shabaab militants. However, locals have repeatedly dismissed the claims, arguing that they were law-abiding citizens, who were falsely targeted by the Kenyan military.

And in response, the Federal Government of Somalia has deployed more soldiers to the region, a move which might escalate the conflict between the two forces, which collaborate closely in the fight against Al-Shabaab within Somalia, a country which has been struggling with insecurity for several years.

The SNA troops could also clash with KDF, which has been carrying out airstrikes in Gedo for a couple of months now. In photos circulated widely on social media, the Somali troops were seen making entry into Gedo where they are said to have established bases.

Besides creating a possible rift with the Kenyan troops, SNA presence could also jeopardize ongoing preparations for elections in Somalia. Recently, Jubaland President Ahmed Madobe warned that failure to withdraw to forces to the region would derail elections in Jubaland.

According to him, the federal troops could interfere with elections in favor of candidates friendly with the Mogadishu administration. He also asked President Mohamed Abdullahi Farmajo to reinstate administrators who had been chosen by the regional leadership for the sake of peace in the region.

For several months, Madobe, who is a close ally of the KDF, has been at loggerheads with Villa Somalia, which he accuses of undermining his administration and even attempting to overthrow him. But in defense, President Farmajo has often maintained that SNA has a responsibility to guard Somalia borders.

The conflict in the region has often escalated to neighboring Kenya especially in Mandera. Early this year, Kenya warned that it would be forced to defend her "territorial integrity" after SNA troops clashed with Jubaland security forces, in a fight that spilled over the border, but the differences were immediately solved.