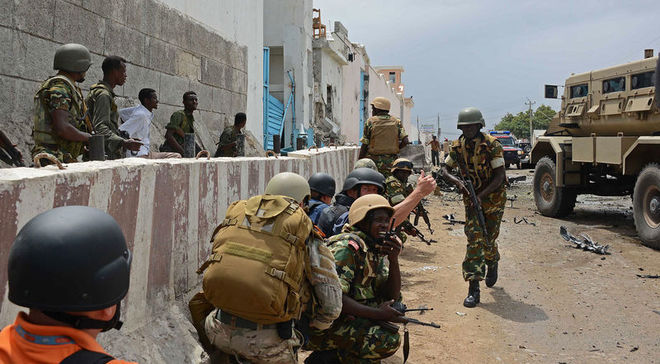 MOGADISHU, Somalia – Several people were wounded when gunmen fired a barrage of mortars that landed inside the main United Nations and AU facilities in Somalia's capital Mogadishu, the UN said on Sunday.

The UN envoy for Somalia, James Swan, condemned indirect fire attack on the United Nations and AMISOM compounds in Halane compound, which houses foreign diplomatic missions, including a recently re-established US embassy.

The Islamist group Al-Shabab claimed responsibility for the attack which took place at 1:15 p.m. local time, saying 9 mortar rounds landed in the heavily fortified base, killing 6 people, including 2 foreigners and wounding 5 others.

“I am appalled by this blatant act of terrorism against our personnel, who work together with the Somali people on humanitarian, peacebuilding, and development issues. Thankfully, the majority of our staff is unhurt. I wish our wounded colleagues a full recovery from their injuries,” said Swan.

The Shabab, an al-Qaeda affiliate, is fighting to overthrow the internationally-backed Somali government in Mogadishu which is protected by 22,000 African Union soldiers serving under AMISOM.

The attack comes amid tight security in the capital as Somalia on Monday, "October 14" marks the 2nd anniversary of one of the world’s deadliest attacks since 9/11, a truck bombing in K-5 junction, in the heart of the capital that killed nearly 1,000 people.

On the 2nd January 2019, two UN staff members and one contractor sustained injuries in a similar mortar shelling on the main United Nations base in Somalia's capital Mogadishu.

Such attacks used to take place nearly daily, but have declined since Al-Shabab militants fled fixed positions in the capital in 2011 following a joint military operation by the Somali army backed by the African Union forces.

The extremists still control parts of the countryside and carry out attacks against government, military and civilian targets seemingly at will in both Mogadishu and regional towns.