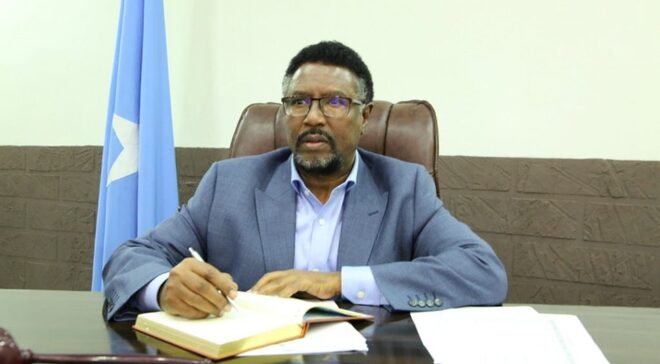 MOGADISHU, Somalia - Somalia will not conduct indirect elections commonly referred to as 4.5 model, Lower House Speaker Mohamed Mursal Abdirahman said on Wednesday, in a statement that further complicates the pre-election crisis, which has grounded political activities in Somalia.

Already, the National Independent Electoral Commission [NIEC] has ruled out the possibility of holding universal suffrage polls this year, arguing that the earliest Somalis can vote is March 2021. The commission seems to have settled on the universal suffrage model which is being referred to by members of the international community.

However, critics among them the federal states leadership and the opposition insist that the model would lead to automatic term extension, a move they say that would violate the current provisions of the constitution. The current term of parliament and executive expires in October.

But Mursal, a close ally of President Mohamed Abdullahi Farmajo, said the country will not afford indirect polls, arguing that they are "unconstitutional" and undermines "democracy" in Somalia. Over the years, the country has been using the clan-based model to pick MPs who eventually elect the president.

The speaker made the statement on Wednesday in Parliament where he insisted that parliament will "decide" the model for elections. MPs were debating the amendments to the electoral law based on proposals delivered by the parliamentary ad-hoc committee.

Parliament, he noted, has powers to enact legislation for the elections as enshrined in the constitution. He said MPs' final ratification would guide Somalis to the next elections, adding that regional leaders and the cabinet do not have "powers" to decide on the right model to be used.

"It is parliament which has powers to ratify those laws and anything beyond that is unconstitutional. The MPs will make a final determination on this matter and this will be final, nobody will challenge it," the speaker told MPs, most of them who support the current regime.

His statement comes amid an ongoing meeting in Dhusamareb, the regional administrative capital of Galmadug, which brings together all the five federal states leaders. On Tuesday, the leaders ruled out universal suffrage polls, arguing that it would lead to a term extension for Farmajo.

Somalia leadership, they added, should strike a politically negotiated deal to end the stalemate before "it gets too late". They asked President Mohamed Abdullahi Farmajo to grace the meeting, adding that any delay could trigger political uncertainty in the war-torn nation.

Mursal's statement seems to be a formal stand of Farmajo, who has since supported the one-person-one-vote model. But there could be divisions within government has given actions by Prime Minister Hassan Ali Khaire, who has been calling for timely elections.

On Tuesday, Khaire in the company of Mahad Abdallah Awad, the deputy speaker, arrived in Dhusamareb for the regional meeting. Details of his submissions are yet to be established but he had warned against term extensions in his previous addresses to the cabinet.

The Lower House has also been in the receiving end from the Upper House, which seems to be against ongoing legislation. Senate Speaker Abdi Hashi had termed Lower House' deliberations "null and void", and instead, called for negotiations involving all stakeholders.

Besides the thorny electoral model and date for elections, stakeholders are yet to agree on the 30 percent quota for women representation, the representation for Banadir and Somaliland among other issues. International partners have been calling for "honest" dialogue between FGS and federal states.