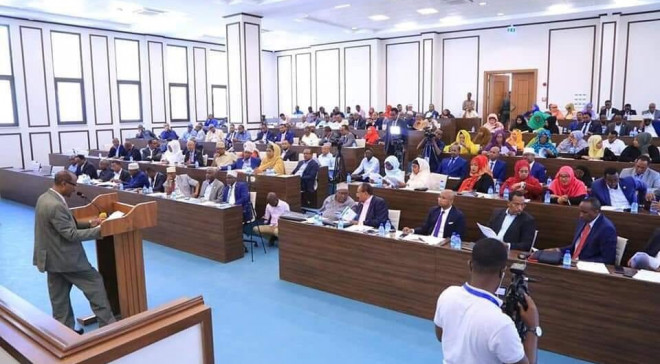 MOGADISHU, Somalia - Somalia's bicameral legislature will hold a joint session today [Monday], a few days after legislators took the oath of allegiance in line with the provisional constitution of the federal republic of Somalia, which had delayed elections for over a year.

On Monday, sources said, the new parliament will among others approve the Rules of Procedures. The House election committee is expected to register candidates for the Speakership from April 19-21, reports from the chambers indicate.

Abdirizak Mohamed, the veteran MP, was picked as the leader of the parliamentary committee tasked to hold elections for the speaker of the Lower House. The opposition legislator said he will ensure it seat is filled soonest in line with the constitution.

"I am honored to be elected as the Chair of the parliamentary committee tasked to manage the election of the speakers of the House of the People. We will do this swiftly so that we can quickly finalize Somalia’s electoral process. Thanks to my colleagues for their confidence in me," he said.

According to reports, a handful of pro-Villa Somalia MPs are attempting to block today's agenda in a bid to delay the house leadership election so as to buy time for Fahad Yasin who still scrambling to get approved. Meanwhile, the majority of MPs are in favor of the agenda.

Yasin moved to the Supreme Court after FEIT nullified his election as MP for HOP086, noting that he was unfairly sidelined. Already, the office of the State Attorney General has advised the Supreme Court to do away with the case, arguing that of lacks substance.

Also, multiple sources said parliament is reportedly planning to increase registration fees for both presidential candidates and the leadership of the parliament. It’s being proposed Presidential hopefuls to pay $40,000 [it was 30,000]; Speakers and Deputies will pay $20,000 and $15,000 [up from $15,000 and $10,000 respectively]