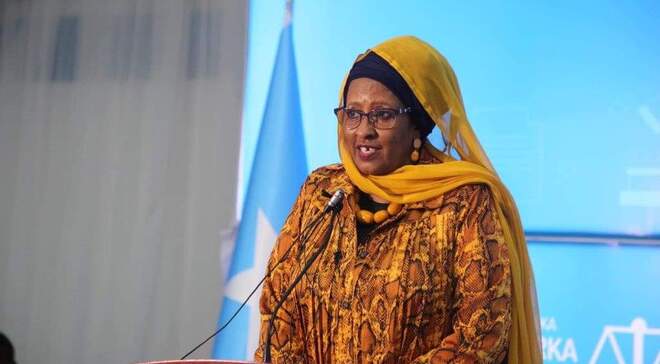 While addressing parliament on Saturday, Ms. Halima Ismael said the limited time cannot "guarantee" free and credible elections within 2021, adding that the commission cannot be able to beat the deadlines.

NIEC says To hold 1p1v polls, it needs to meet the following requirements;

The decision could now throw all stakeholders off balance, and perhaps plunge the country into chaotic electioneering debates, given that the model for elections has been controversial, even causing confusion among top political parties.

Already, the United Nations and the US, which are key stakeholders in Somalia's development and social-economic affairs, have endorsed the one-person-one-vote model, arguing that it would give the people decide to choose their leaders. The same narrative has been supported by the Federal Government of Somalia

However, the opposition and some federal states, have raised reservations about the possibility of using the model by the end of this year, adding that it would lead to an "unconstitutional" term extension of the current administration, whose tenure ends in October.

To them, the country should adopt an "affordable" model temporarily for 2020 polls before shifting to universal suffrage in subsequent elections. President Mohamed Abdullahi Farmajo had insisted that his leadership would ensure elections are held within the stipulated period.

In her statement, Ms. Ismael said that her team can deliver an election involving biometric registration of voters in August 2021 or a manual-based universal suffrage polls in March the same year, a move that would effectively extend the term of the current regime if adopted.

The quagmire can now be solved on a consensus or through parliament, which is hugely divided. Farmajo had called for a dialogue meeting between FGS and federal states, with Mogadishu leadership also involved for July 5-7 this year.

Pundits believe that it's in this meeting a lasting solution could be mooted. The country will now have to postpone elections until next year or decide to use the traditional clan-based model commonly called 4.5, which has been dismissed by critics as "archaic and discriminatory".

In a paper unveiled on Friday, the Heritage Institute of Policy Studies, a Somalia-based think tank, insists that "the technical preparation required for a
universal suffrage election is also not available". The new law, it adds, "infuses modern democratic norms with traditional power-sharing principles, calls for a biometric system to be used".

Will no voter registration available and with just six months to the anticipated polls, the Think Tank insists that it's practically impossible for the NIEC to hold universal suffrage polls, adding that the move could plunge the country into unprecedented chaos.

"It will be difficult, if not impossible, for the National Independent Electoral Commission [NIEC] to raise the funds needed, purchase the equipment and develop the capacity to operate it within the eight months remaining before the election," the group said in a report. "Given the short amount of time left, stakeholders must find common ground on the election model."

Electoral challenges are synonymous with many African countries where democracy only exists on paper. More often than not, most incumbent leaders cling to power by using technical excuses, a move that triggers chaos and instability.

Rashid Abdi, an analyst on Horn of Africa affairs, says "Africa cannot manage its elections. That sad fact must be AU's top priority because contested elections big drivers of instability. It is not enough to send observers."

Meanwhile, despite a request by regional leaders to have debates and approval of electoral laws halted in Lower House, parliament continued on Saturday with the process, this time voting on the representation of Mogadishu in the House.

The Somalia capital falls under the Benadir region which is not part of the five federal states. The representation of the region and that of secessionist Somaliland have been controversial over the years.

But the Lower House has now allocated the region 13 seats in Upper House [Senate], in which the senators would be picked based on the 4.5 model. Preliminary reports indicate that the parliamentary ad-hoc committee had settled on 7 seats in the report which was recently tabled.

During Saturday's debate, 142 MPs voted in favor of the motion while four opposed it. Speaker of the Lower House of Parliament Mohamed Mursal Sheikh Abdirahman announced the results and the report will be sent to Senate for implementation.

However, some MPs from Jubaland and Southwest states walked out during the debate, terming the allocation of the seats "unconstitutional" due to lack of quorum. Already, the House has also approved representation for Somaliland and 30 percent quota for women representation.

Senate Speaker Abdi Hashi Abdullahi had dismissed the ongoing debate in Lower House, terming it "unconstitutional". According to him, the report by the ad-hoc committee had been mutilated, citing about 27 clauses that he insists that have been tampered with.

The UN had lauded Somalia for "willingness" to hold elections during the submission of the quarterly reports for progress in Somalia. The Horn of Africa nation held universal suffrage elections last in 1969 before the infamous coup which was executed by former leader Siad Barre.